Japanese signal station and cruiser 'Myoko' near Singapore Naval base 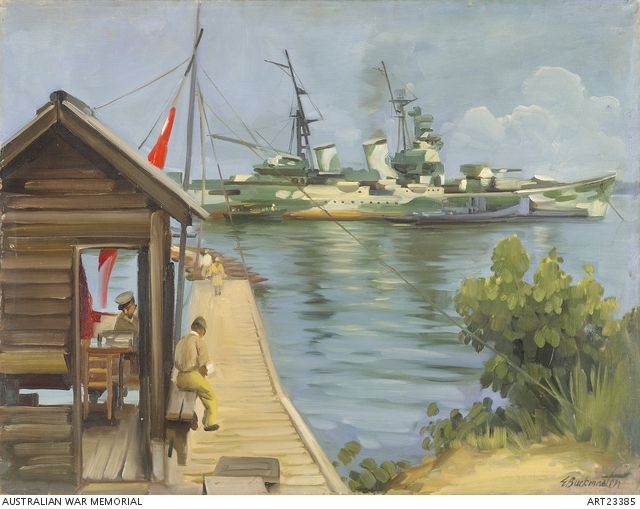 Ernest Buckmaster was first offered a position as an official war artist on January 20 1945, following the recommendation of the previous Director of the National Art Gallery of New South Wales, James Stuart Macdonald, though he did not accepted his appointment until August 24 1945, following the completion of a private art commission in New Zealand. Due to his age of 48 and poor health Buckmaster was not enlisted in the army and was accredited as a war correspondent. Despite being commissioned to paint the Japanese surrender, after a lengthy process preparing to be transported to Singapore, Buckmaster, along with a group of correspondents and photographers arrived two days after the surrender ceremony.

This painting was completed in the Harbour at Singapore soon after the Japanese surrender. Featured in the painting is the Japanese cruiser "Myoko" and a signal station. Buckmaster stated in his diary that “when this painting was nearly finished, the Japanese officer, who had been sitting at a table in his little office under the big drooping flag, came out and asked if I’d like to wash my hands and make tea. “Yes, certainly, thanks’, I said, and while looking at my painting he also said, ‘I know Sydney harbour, I know sunny Australia.’”