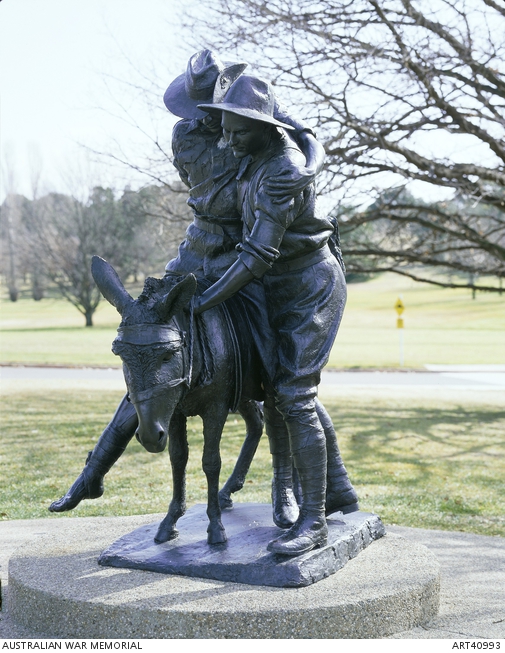 'Arguably Australia's most famous soldier is neither a general nor a Victoria Cross recipient, but a stretcher bearer who served briefly in the nation's first major campaign'. Peter Corlett's sculpture 'Simpson and his donkey, 1915' marks both a reaffirmation and a fresh look at this essential ANZAC story. The work describes a dangerous journey. Pain and fatigue are etched into the face of the wounded soldier, in the protruding veins of his forearms and in the rigid extension of his injured leg. The crumpled ragged clothing and roughly bandaged ankle reveal the desperate conditions borne in the midst of battle. Other carefully chosen details remind us that these are Australian soldiers fighting at Gallipoli, the slouch hat, Rising Sun badges and the puttees wound above the boots. The donkey wearing the Red Cross insignia also shows the strain. In contrast to the human figures it seems less then life size, and with the awkward positioning of its front legs, and its precarious forward lean, we fear it may topple over. Simpson is looking ahead from under the brim of his slouch hat and guides the party forward. His responsibility to his charge is not only an emotional link but a real, physical connection, with his strong arm firmly supporting the injured soldier and steadfastly taking the weight across his shoulders. The sculpture is warm, accessible and above all, a work about humanity. Corlett intended the figures to be touched, and hoped that the donkey's nose would eventually be rubbed smooth by children. Fifteen years later the donkey's nose is shiny, a testament to Simpson's story having been brought alive for yet another generation of Australians.' Fiona Clarke.