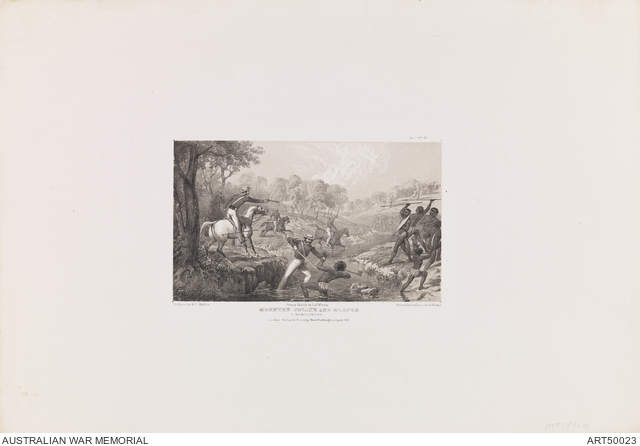 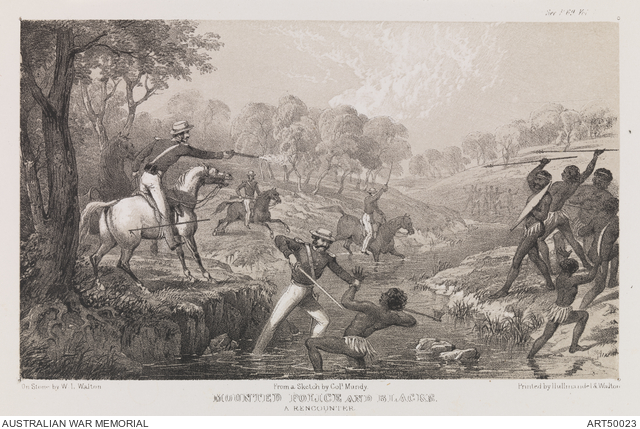 The Slaughterhouse Creek massacre of 26 January 1838 occured when New South Wales Military Mounted Police, under the command of Major James Nunn, set out in response to violence on the Liverpool Plains. At Slaughterhouse Creek, also known as Waterloo Creek, the Mounted Police battled with Gomeroi (Kamilaroi) warriors. A trooper was wounded, having been speared in the leg, and one soldier estimated that 40 to 50 Gomeroi were killed.

This lithograph originally appeared in 1852 as the frontispiece to the first volume of General Godfrey Charles Mundy's memoirs, 'Our Antipodes: or, Residence and Rambles in the Australasian colonies, with a Glimpse of the Goldfields' (3 vols, London, 1852). It was one of 12 prints executed by W.L. Walton after drawings by Mundy and his wife, Louisa.

A professional officer in the British Army, Mundy was in Sydney from 1846 to 1851 as deputy adjutant-general of the British military forces in Australia. The Mounted Police at that time was made up of British soldiers, and when he arrived in Sydney Mundy heard about the massacre from soldiers in the garrison. Mundy completed his drawing from his imagination.