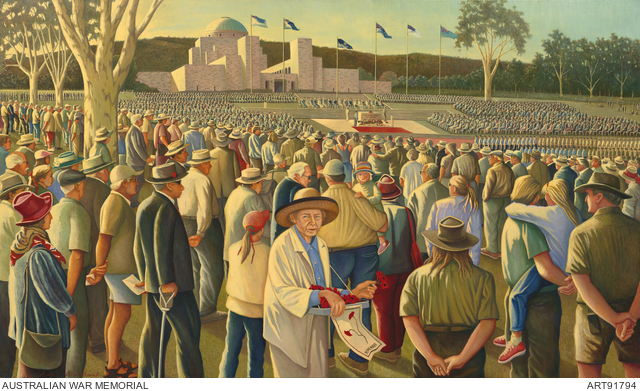 The Memorial first opened on Remembrance Day, 1941. In recognition of the 60th anniversary of this event, Marchant was commissioned to paint the Remembrance Day ceremony of 11 November 2001. His approach was to frame the scene from the point of view of the spectators rather than focusing on the official participants, consciously emphasising the continuity of the ceremony through the years and its relevance to succeeding generations of Australians. The artist described the crowded parade ground as representing 'the older generation of Australians', who have suffered the sorrows and hardships of war, passing on to their children the history of how war affected them. Two people in the crowd are shown looking away from the ceremony, but engaging the viewer: an elderly woman selling fabric poppies, and a young girl held in the arms of her father. This supports a simple narrative in Marchant's composition: the passing on of a sobering story from old to young, generation to generation, a story kept alive simply by people who choose to remember, thereby forming a link from the past to the future. It is a foil to the much more complex history that the scene encompasses - that of Australia's military past and its significant involvement in two world wars, fought at an enormous price and for reasons perhaps not easily justified. Marchant's commemorative painting is primarily about those people of Australia, from all echelons of society, who continue to respond enthusiastically to what could have become merely an arcane ceremony. The response of the young, in particular, is a phenomenon that Marchant has keenly observed. He offers a partial explanation for this by simply showing children being brought to the ceremony by their elders. The main Memorial building is positioned in the background, yet is central to the scene. It can be seen as attracting the crowd to it, drawing them towards the experience of learning about the past and serving as a sentinel.