Enrolling troops for South Africa in Sydney: the rush of applicants 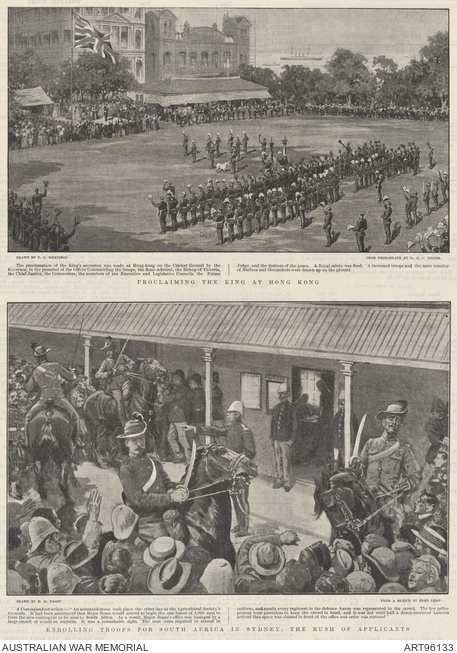 As part of the British Empire, the Australian Colonies offered troops for the war in South Africa. Australians served in contingents raised by the six colonies and from 1901, by the new Australian Commonwealth. The Australian contribution to the Boer War consisted of five 'waves'. The first were contingents raised in 1899, the second and third were 'Bushmen' and 'Imperial Bushmen', and the fourth 'draft contingents'. The Australian Commonwealth Horse contingents were raised as the fifth wave. In all, some 16,000 Australians fought in the Boer War. From a sketch by Fred Leist (1878-1945), this work represents the eagerness with which Australian recruits joined to serve in the Boer war, here rallying to sign up at a pavilion at the Australian Agricultural Society's grounds in Sydney. Crowds are held back by mounted military men on horses. Leist began as a black and white artist, contributing drawings for the illustrated press, and went on to become an Official War Artist in France in 1917. Originally appearing in the London newspaper The Graphic, the work is a photogravure; an intaglio printmaking technique where copper plates are coated with a light-sensitive gelatine tissue which has been exposed to a film positive, and then etched, resulting in a high quality print able to reproduce the detail and tone of a photograph or painting. The technique became common from the 1850s, and was often used in newspapers, magazines and packaging.