not titled [Study for Pro Humanitate] 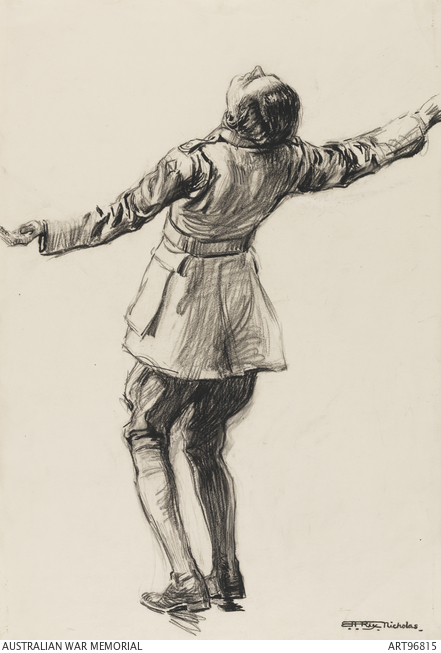 This drawing is a study for the central panel of the triptych Pro Humanitate (1917) one of three major oil paintings completed by Rix Nicholas in the years directly following the death of her husband. The original painting was destroyed by fire in 1930. Offered to the Memorial by the artist in 1922, the triptych was rejected for being too personal for a public institution by the Memorials’ Art Committee. However, they were willing to accept the central panel if it was sufficiently accurate from a historical point of view. Rix Nicholas refused to break up the triptych. She defended it by saying it was national in spirit – not a representation of her marriage.

While popular with returned soldiers Rix Nicholas’s work was not well received by the Australian arts establishment as she was working in a style and nationalistic sensibility not generally explored by women at that time. It should be noted that Australia, unlike Britain and Canada, did not appoint any women as official war artists during this period. The contemporary reaction to the works in the Australian press and by Australian public cultural institutions reveals much about the exclusion of women in post war Australian society from public commemoration and the construction of a new national identity.