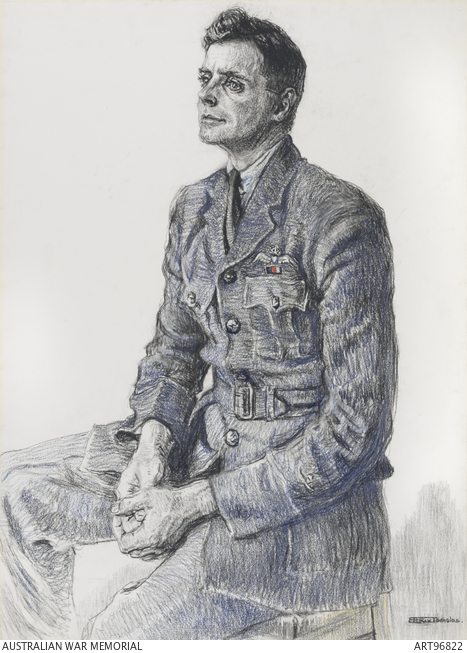 This portrait was painted by Hilda Rix Nicholas (1894-1961) in her studio on the family property of “Knockalong” near Tombong, via Delegate NSW in 1945. It is of 412345 Flying Officer Roger Frederick South who had returned to the Monaro district following his discharge from the Royal Australian Air Force (RAAF) to work on his family pastoral property “Cumbamurra”. Born in Bombala, NSW on 17th November 1915 South had enlisted as an airman on 20 July 1941 in Brisbane where he was employed as a pastoral worker. Following training in Australia he left for Britain in 1942 before being transferred to India in September 1943. There South was commissioned as a Pilot Officer to train men to fly Liberator bombers. The squadron flew long range bombing operations over South East Asia including bombing of the Thai Burma Railway. In February 1945 as RAAF operations were scaled back he returned to Melbourne.

This rare portrait is one of only two by the artist of young servicemen from the Monaro district and they demonstrate the Rix Nicholas’s strong connections to this region and ongoing interest in depicting insightful portraits of servicemen.

Donated through the Australian Government's Cultural Gifts Program in 2015