Join us in a victory job 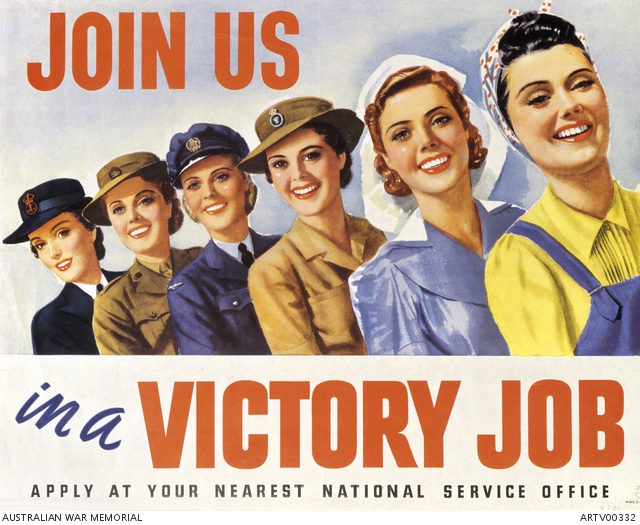 A Second World War poster depicting six women, representing the WRAN, AWAS, WAAAF, AWLA, AAMWS, and a munitions worker. The poster is designed to encourage women to join the services or become involved in industry to help in the war effort.

This work is a good example of the recruitment posters aimed at women during the Second World War. It draws on elements of popular visual culture to counter the perception of only a few years before that it was inappropriate for women to enlist in the military services or to work in heavy industry and agriculture. Using bright and vibrant colours, the poster employs imagery typical of pre war and contemporary advertising in its line up of attractive, radiant women of indeterminate age and social standing. The six women depicted include members of the three services, army and civilian nurses and, right at the front, a generic factory worker or land army girl. The imagery and the wide range of occupations make the poster all-encompassing, implying that there is a job for every Australian women and that she must take it up. The airbrushed attractiveness of the women also suggests that women who take up these new forms of employment retain their femininity, a major concern for men, and a reassurance for the women that their new and unfamiliar roles were legitimate.