Daddy, what did you do in the Great War? 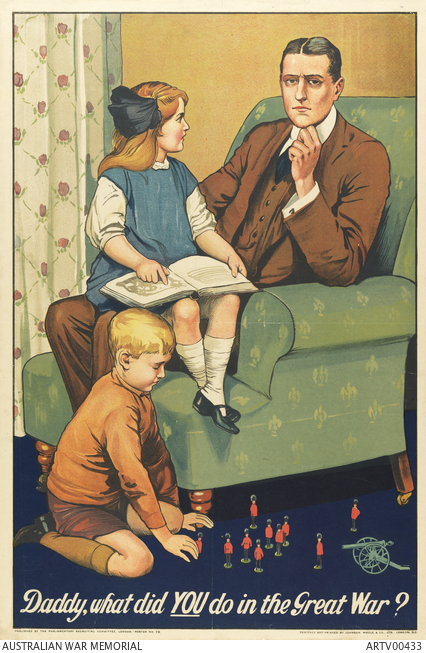 Depicts a father sitting in an armchair with a look of concern across his face. His son plays with toys soldiers below him on the carpet, while his daughter sits on his knee, pointing to a page in her book and asking what he did in the Great War. Arguably the most remembered British First World War recruiting poster. It was recorded as a favourite with many soldiers, who displayed it, complete with appropriate answers, on the walls of their dugouts. Australia had its equivalent - Harry J Weston's poster incorporated a woman before a tattered Australian flag 'Were YOU there then?'.

A call to increase industrial production Carlu’s inspirational visualisation of the colloquial saying ‘give ‘em both barrels’ – meaning to give it everything or to attack somebody with great force – packs visual punch. Using the violent imagery of gunmen it equates the tools of munitions workers with those of frontline soldiers leaving no doubt in the viewers mind of the vital importance of these roles in defeating the enemy.