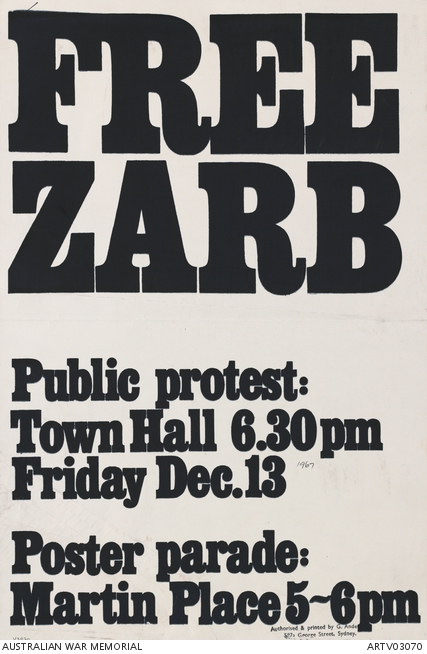 Text poster advertising a public protest at Sydney Town Hall and a poster parade in Martin Place, Sydney, against the gaoling of John Zarb. On 14 October 1969, John Francis Zarb, a 21 year old postal worker and part-time student, was the first man to be found guilty of having failed to comply with his call up notice and was sent to a civilian goal for non-compliance with the National Service Act. When Zarb had applied to be registered as a conscientious objector, the magistrate said that Zarb had established that he had sincere and conscientious objections to service in Vietnam, but the Act did not recognise objections to a particular war. As a conscientious objector, he was sentenced to two years jail in October 1968, but served only 10 months and seven days in Pentridge Prison , Melbourne. He was released in August 1969 on grounds of the distress his imprisonment caused his family. His release on compassionate grounds followed months of sustained protest by many sectors of the community who viewed Zarb as a martyr to the anti-war cause.