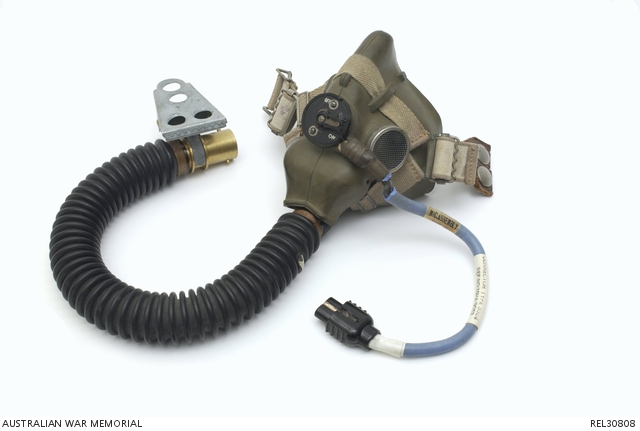 Type 'H' green rubber oxygen mask with built-in Type 57 microphone. The mask is lined with white chamois leather, and has cotton web and elastic straps for attachment to a flying helmet. A 29 cm corrugated black rubber oxygen hose emerges from the bottom of the mask and ends in a brass plug with an attached alligator clip. The left hand cheek of the mask has a mesh covered valve to allow the passage of ambient air. Raised markings on the mask read 'A 1/51' (date of manufacture) 'MEDIUM' (size) and 'DETACH TUBE HERE' with an arrow indicating the location point. The microphone has a black plastic circular front with a rotating On/Off switch. A lead insulated in blue rubber emerges from the left hand side of the microphone and ends in a black plastic plug for attachment to the flying helmet.

The Type 'H' oxygen mask was developed from the earlier Type 'G', and entered RAF service in 1944. Its main advantage over earlier masks was in the fitting of the lightweight Type 57 transmitting microphone unit (actually the US designed MC253 adapted for British use.) The mask saw relatively little service during the Second World War, but was extensively used by RAAF aircrew in Korea, and proved so successful that it remained in RAAF and RAF service without modification until the 1980s.