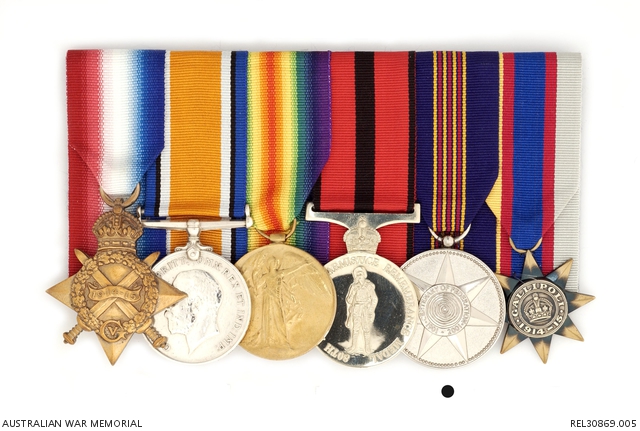 Centenary Medal. Pantograph engraved on reverse with recipient's details. Designed by Balarinji of Sydney, the obverse of the medal features a seven-pointed Commonwealth Star. At the centre of the Star is a pattern of circles, (an Aboriginal representation of the heart of the Australian continent) surrounded by a circular band containing the words 'CENTENARY OF FEDERATION 1901 - 2001'. The reverse has the Federation star with a circle containing the recipient's details superimposed upon it. Around the outside of the circle are the words 'FOR CONTRIBUTION MADE TO AUSTRALIAN SOCIETY' in raised lettering. Around the outer edge of the medal on each side are 100 dots symbolising 100 years of Federation. Suspension is by a ring, and the ribbon is blue with four gold and three crimson narrow stripes at the centre, these seven lines representing the pathways to Federation of the states. The blue and gold colours represent the beginning of the 21st Century, while the red stripes are the colour of Federation.

The Centenary Medal was announced by Prime Minister John Howard on 28 December 2001. It is intended to honour living persons who have made a contribution to Australian society or government, including all those surviving Australians born before 1 January 1901, who have lived through our first century of Federation. Alec William Campbell was born in Launceston, Tasmania, in February 1899. Aged just 16, with reluctant parental approval (and lying about his age) he enlisted in the AIF in July 1915, claiming to be an 18 year old clerk, and despite his small size and obvious youth, sailed on the 'Kyarra' in August 1915 as No 2731 with the 8th Reinforcements to 15 Infantry Battalion. Landing at Gallipoli on 2 November, Campbell served as a water carrier for the remainder of the campaign at Anzac. While at Gallipoli, he suffered from a bout of influenza, and was also injured when accidentally struck in the face by a comrade's rifle. He, and the rest of the battalion, were evacuated from the peninsula as part of the general withdrawal on 13 December. On 1 January 1916, he was admitted to 2 Australian General Hospital in Egypt, and over the next six months suffered from jaundice, mumps and Bells Palsy, a form of facial paralysis caused by the facial injury he had suffered at Anzac. Although occasionally allowed to return to his unit, Campbell's health during this period was never good, and he was eventually repatriated to Australia medically unfit in June 1916, aboard the A.15 'Port Sydney', and discharged from the Army. After the war, Campbell worked in the construction of railway carriages and houses, before joining the Public Service, where he eventually became a research economist. The Bells Palsy which developed as a result of his Gallipoli injury eventually caused the loss of his right eye. When Roy Longmore died in June 2001, Alec Campbell was left as the only surviving Australian veteran of the Gallipoli campaign. He died on 16 May 2002 in Hobart.