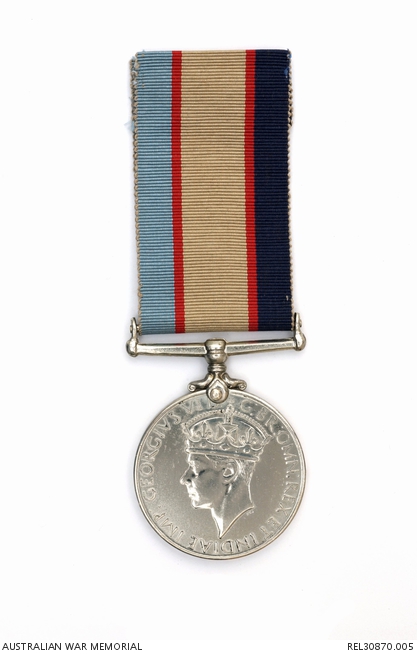 Awarded to 422170 Flying Officer Douglas Frederick George Gray. Born in Auckland, New Zealand in March 1921, Gray enlisted in the Royal Australian Air Force in Sydney on 25 April 1942, aged 21. He joined the Empire Air Training Scheme in Canada and was promoted to Temporary Sergeant in January 1943. He arrived in the United Kingdom on 17 March 1943 and completed further training with 4 Air Observers School. He joined 26 Operational Training Unit on 13 July 1943 and was promoted to Temporary Flight Sergeant on 22 July. In October he joined 1657 Conversion Unit and remained there until January 1944 when he transferred to 31 Base unit. In April he spent three weeks with 75 Squadron, RAF before returning to 31 Base. On 22 July he was promoted to Temporary Warrant Officer and in August joined 514 Squadron, RAF. He was discharged on 14 November 1944 on appointment to a commission as Pilot Officer and this was conferred on 15 November. Gray was discharged on 4 September 1945 with the rank of Flying Officer and his last recorded unit was 27 Operational Training Unit.