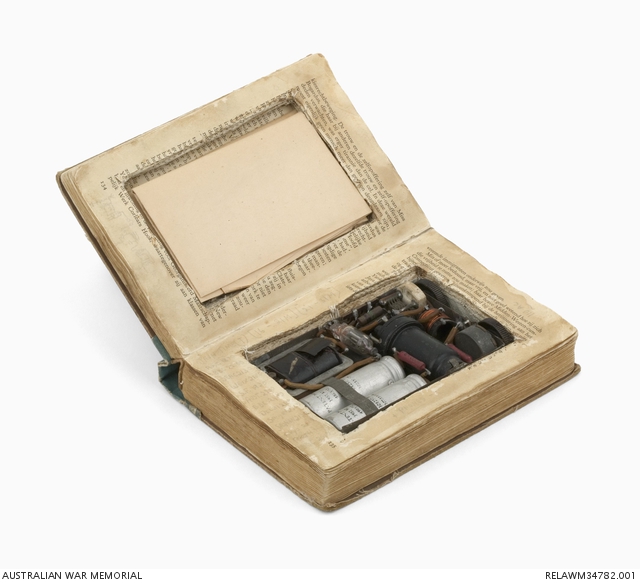 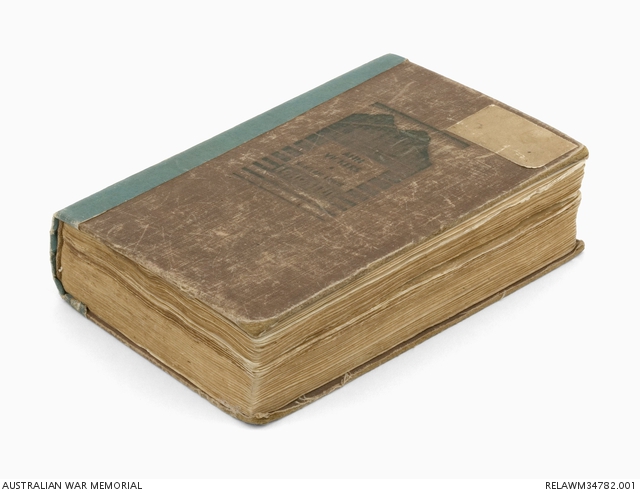 Hardback copy of Sinclair Lewis's popular book, "Ann Vickers", this version published in Dutch in Amsterdam in 1936 as a third edition. The last two thirds of the book has been sewn together and has a central portion cut out allowing a small basic radio to be installed inside the book. The radio has been hand soldered and constructed from disparate parts.

Radio set concealed in a book and a pair of clogs, made by Flying Officer (F/O) H W Closter, RAF (Australia) during his period of captivity. Closter was a member of the Royal Air Force (RAF) captured by the Japanese at Garoet in Central Java in early March 1942. In a report made to RAF HQ, Melbourne on 1 October 1945, F/O Closter explained that he and 2,500 others (mainly British, Dutch, Chinese and Ambonese) were rounded up by the Japanese and sent to Boei Glodok at Batavia where they were crowded into a space meant for 600. In discussions with senior officers, the need for a radio was identified, but, 'the Japanese had made it quite clear that operation of short wave radios would mean execution for all concerned'. For this reason, and issues of security, 'it was decided that I alone would endeavour to accept full responsibility for the construction, operation and maintenance of the outfit it was proposed to build'. The Japanese had organised POW work parties to clear the Batavia waterfront. While clearing the Lindetevis Stokvis warehouse, prisoners located suitable radio parts. Closter then arranged to be put in charge of a work party, had a diversion created, recovered what was required and had the parts smuggled back into camp over the following week. The transmitter parts were separated out and stored in a buried petrol tin for later use. Closter then set to work making the first radio receiver. It required 'a little ingenuity and a lot of patience. All work had to be done at night under a mosquito net and in poor light. Owing to the sweltering tropical conditions, it was nothing to lose a pound or two in weight after a long session under the net.' Closter's hard work resulted in a reasonably bulky set, battery powered, which was concealed in a large tin trunk buried in one of the gardens, arranged so that when the lid was lifted, the entire camouflaging garden lifted as well. It was only operated in the evenings and in the early morning, with lookouts posted. 'I'll those at Boei Gloduk will never forget the thrill of our first radio contact with the outside world. Rumours were dispelled and no longer did we feel isolated and forgotten'. The news garnered from the radio was dubbed the 'Ice Cream' and disseminated through a morning verbal briefing to officers. In early 1943, the Japanese cleared out Boei Glodok and centralised all the POWs at the old Dutch 10th Infantry Barracks, dubbed the 'Cycle Camp'. Closter remembers this camp being run in a much harsher basis by the 'notorious' Lieutenant Sonie; a sudden increase in security and discipline late in 1943 almost forced the radio's destruction, but Closter felt he could reduce its size further. He simplified the design to the point where it would fit in a hollowed out book. 'At this time, the book was only taken out of its place of concealment for 15 minutes daily'. Despite further moves and increased discipline, the set was never discovered. 'During 3 ½ years, the set was made and re-made many times, the design becoming progressively simpler and dimensions steadily shrinking. Camouflage included the receiver being installed in a flower garden, service water bottle, a shelf, a table, a stool and finally in a book with the addition of wooden clogs for transport from camp to camp'. Clogs were chosen because they were so commonplace in POW camps that the Japanese were unlikely to suspect them. Reception was excellent and 'far exceeded all expectations. Daily new bulletins were received from Australia, London, America and S.E.A.C. The circuit was of the single valve cathode trapped type reaction. A miniature bell transformer provided the filament supply. High tension voltage was obtained straight from the 110 volt mains supply through a miniature diode rectifier. Voltages could fluctuate anywhere between 70 and 130 volts. The single earphone was always kept apart from the receiver.'