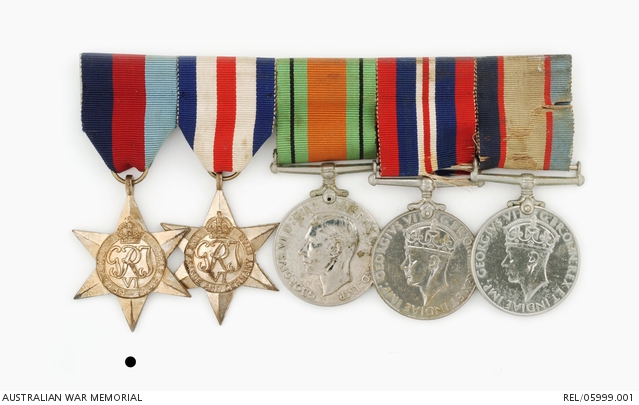 Nicholas Francis Robinson was born at Melbourne, Victoria, in 1924, and was an 18 year old clerk at the time of his enlistment in the RAAF in August 1942. Selected to become an Air Gunner, he trained in South Australia before embarking for the United Kingdom in November 1943. After further training with 27 Operational Training Unit (OTU) and 1652 Heavy Conversion Unit (HCU), Robinson was posted in July 1944 to 466 Squadron RAAF at Driffield in Yorkshire, as a sergeant tail-gunner on Halifax bombers. He commenced operations in August as part of the crew of Flying Officer T J Kenyon, RAAF. This crew completed 17 operational flights to targets in France, Germany and Holland, before being shot down by flak in Halifax LW 372 during a daylight attack on the synthetic oil plant at Sterkrade, near Essen in the Ruhr valley, on 6 October 1944. Only one member of the crew survived to become a POW. Robinson and the others were buried at Reichswald Forest War Cemetery. In an earlier raid on Sterkrade, (on the night of 18/19 August) Robinson had shot down an enemy night fighter, the first time he had fired his guns in defence of his aircraft. The official report on the action reads as follows: 'At 0208 Hrs. Halifax MZ 307 of 466 Squadron was homeward bound from STERKRADE flying at 4000' 200 I.A.S. heading 305 at position 5248 N 0207 E (approx 50 miles off the Wash). The rear gunner saw red tracer coming from three points on each wing of an unidentified fighter. The tracer came from the dark part of the sky i.e. Fine Stbd. Qtr. down and went above the Halifax. Corkscrew starboard combat manoeuvre was immediately taken. The attacking range is estimated at 700 yds. At 650 the rear gunner opened fire. The fighter caught fire at 300 yds and went down in flames and was seen burning on the sea. It is claimed destroyed. There was no damage to the Halifax. Although the fighter was U/I two other crews saw and identified a JU88 close to that position at approximately the same time.'