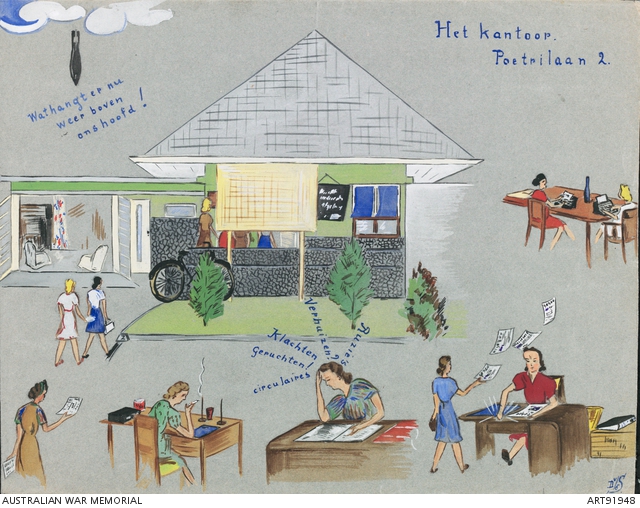 Small vignettes of women working at desks showing the activities taking place inside the office building. The lower central figure appears to be the manager and is dealing with arguments, complaints, rumours and memos. "The office inside the Women's Camp of Karees, manned by the women of this camp for the inhabitants. There was also an office outside the camp manned by the Japanese." Correspondence of Mrs Hanny Balt, November 2001. Mrs Hanny Balt, then Hanny Hessels, was an internee of Camp Karees along with her sister Dicki, nicknamed Ponny, her youngest brother Dirk, nicknamed Bully, her grandfather Dirk Van Zalm and her mother Mrs Frederika Hessels Van Zalm. This is one of 28 drawings created by internees of Camp Karees and presented to Mrs Frederika Hessels Van Zalm as a token of appreciation for her tireless work running the camp's kitchen. Camp Karees, Bandoeng, was one of many internment camps created in Indonesia, by the Japanese, for the detainment of Dutch residents in the Second World War. Camp Karees was created for the detainment of women and children. A number of elderly men were also detained at Camp Karees. The camp held 6000 internees and private cooking was forbidden. All meals were provided form a central kitchen and trading for food from outside the camp was severely punished. 'Karees was a collection of houses in the poorer section of Bandoeng, fenced off with gedek (plaited bamboo sheets) topped with barbed wire.' Shirlie Fenton Huie, 1992.