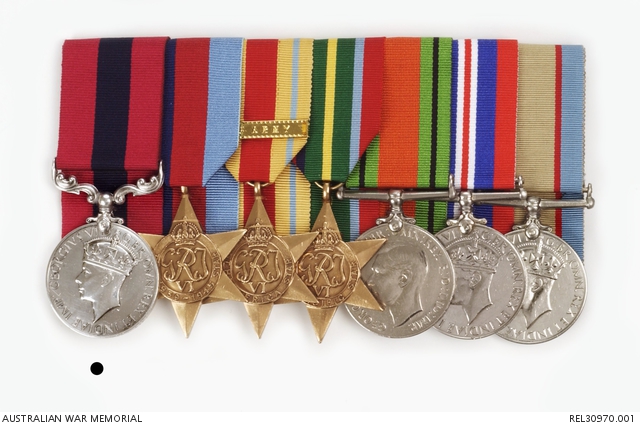 Byron George 'Snowy' Dawes was born at Queanbeyan, NSW, in 1912, and was a bread carter with a local bakery prior to his enlistment in the AIF in May 1940. He became Private NX15984 in 14 Platoon, C Company, 2/17 Battalion. In October 1940, the unit embarked on the 'Queen Mary', bound for the Middle East, where they became part of the newly formed 9th Australian Division. Dawes served throughout the siege of Tobruk, and in the fighting around El Alamein, where he was wounded in the back by shrapnel from a German 88 mm shell on the night of 26 October 1942. After several weeks' recuperation, he rejoined his unit in time for their return to Australia. He was taken ill while on disembarkation leave, and did not return to 2/17 Battalion until just before their departure for New Guinea in August 1943, by which time he held the rank of lance sergeant. After participating in the amphibious landings at Lae and Scarlet Beach (Finschhafen), Dawes was awarded the Distinguished Conduct Medal for his actions on the Sattelberg road near Jivevaneng in November 1943. Following this action, he was trained to become a small arms instructor, but was afflicted by Malaria and Sandfly fever, and had to be evacuated to the Casualty Clearing Station at Finschhafen. After his unit's return to Australia in March 1944, he suffered a further severe attack of Malaria, and after treatment at Concord Hospital he was discharged on medical grounds in September of the same year. Post war, Snowy Dawes worked with the Forestry Service in Canberra, and later with Canberra Electrical Supply, before joining the Australian War Memorial as an Attendant in 1953. He devoted the remainder of his working life to the Memorial, and died in 1978. The citation for the award of the DCM reads as follows: 'On 3 Nov 43 Sergeant Dawes was commanding a section when his company attacked enemy positions near Jivevaneng. From the positions the enemy controlled an important sector for the Satelberg (sic) road. During the first few minutes of the attack heavy fire from enemy concealed in dense bamboo cane killed a number of his section, wounded three others and also the platoon commander (NX50991 Lieutenant W A Graham, who subsequently died of his wounds). Although within 15 yards of the enemy Sjt. Dawes immediately dragged all of the casualties to a position of safety and arranged their evacuation whilst still maintaining the remainder of his section in action. A little later his section was counter-attacked by enemy estimated one platoon strength. Dawes waited until they were within 10 yards then ordered fire which he led with throwing of grenades. A number of the enemy were wiped out and the attack decisively repulsed. Dawes then established himself in a forward position - later found to be only 7 yards from the enemy. Here, despite difficult conditions of flooding rain and much enemy sniping, he continued to harass the enemy vigorously for a period of thirty six hours. During this time he himself threw some 60 grenades, and his offensive action was largely instrumental in forcing the enemy to withdraw and allow the road to be opened. Throughout the whole action Dawes, by his courage, his planned actions and untiring offensive vigour, exhibited outstanding qualities and provided a stimulating example to his company.' The scene of the exploit was later described in the official diary of 2/17 Battalion as: 'A scene of desolation with bodies and equipment everywhere'.