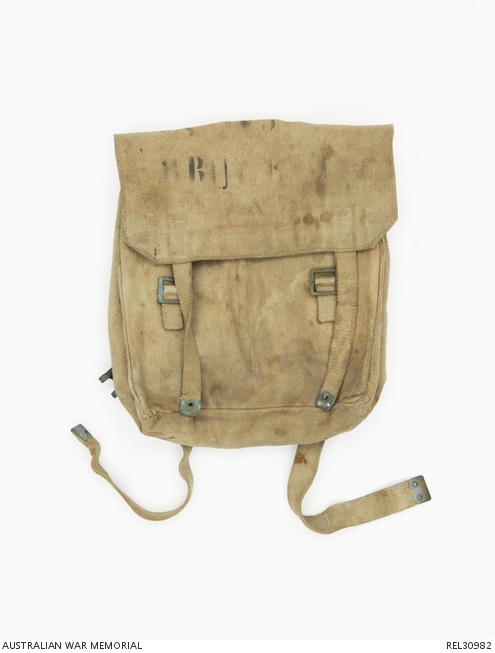 1937 Pattern web equipment haversack with shoulder straps attached. A canvas division with a central partition inside the body of the pack forms two front compartments, intended to hold a water bottle and rectangular mess tin. All buckles and fittings are in brass. On the outer top flap of the haversack is faintly stencilled in black paint 'NX111315 BRUCE J A'.

This haversack was issued to Private NX111315 James Meikle Bruce, 2/16 Battalion, AIF. Bruce was born in 1923 and attempted to enlist in the RAAF during the Second World War. Having passed a medical examination for aircrew, he was recalled to Militia service and volunteered for the AIF. After a period spent serving as an NCO with an armoured unit at Singleton, he was remustered into the infantry, eventually joining 2/16 Battalion, with whom he served as a private in Borneo and the Celebes. Post-war, Bruce joined the CMF as a private in 1948, but was commissioned as a lieutenant (in the Royal Australian Army Service Corps) the following year. He left the force in 1951.