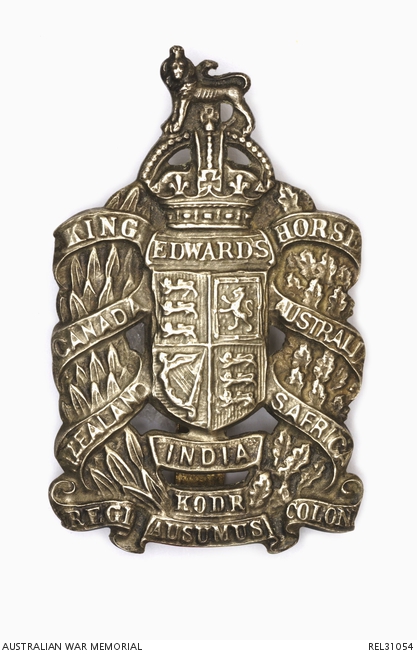 Hat badge : King Edward's Horse (The King's Overseas Dominions Regiment). The badge shows the Royal crest surmounted by a King's Crown and lion. Underneath the crown is a three part scroll with the words 'KING EDWARDS HORSE'. A wreath surrounds the crest and has two scrolls. On the left are 'CANADA' and 'N.ZEALAND' and on the right 'AUSTRALIA' and 'S.AFRICA.' Below the crest is another scroll reading 'INDIA' and beneath that one with the letters 'KODR'. A further three part scroll at the base of the badge has the incorrectly spelled motto 'REGI AUSUMUS COLONI'. The accepted motto was Regi Adsumas Coloni.

King Edward's Horse or The King's Overseas Dominions Regiment was a British yeomanry regiment formed in 1910 and disbanded in 1924.