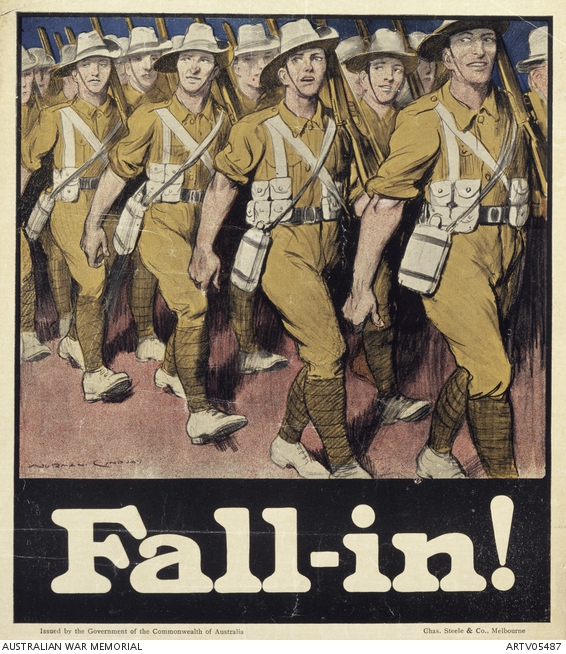 Norman Lindsay (1879-1969) was a painter, draughtsman, illustrator, cartoonist, printmaker, writer and sculptor. He joined the Sydney 'Bulletin' magazine as a staff artist, 1901-09, 1910-23 and 1932-58. During the First World War he produced jingoistic cartoons and pro-conscription posters. 'The last call' and 'Fall in', the last of the series of six Lindsay posters commissioned by Australian recruiting authorities in 1918, had not been used when the Armistice was signed. The former was drawn from photographs of the brother of Lindsay's cook and housemaid at his home at Springwood, NSW.

Recruitment posters were in abundant supply in Australia throughout the First World War. Australia relied solely on voluntary recruits to serve in the AIF. Compulsory military service, or conscription, for eligible men was in force in Australia from 1911, however, these forces were for home defence and could not be used to serve in a war overseas. Following the initial rush of men to recruit in 1914, enrolments dropped, leaving federal and state governments to devise sophisticated campaigns to boost numbers.