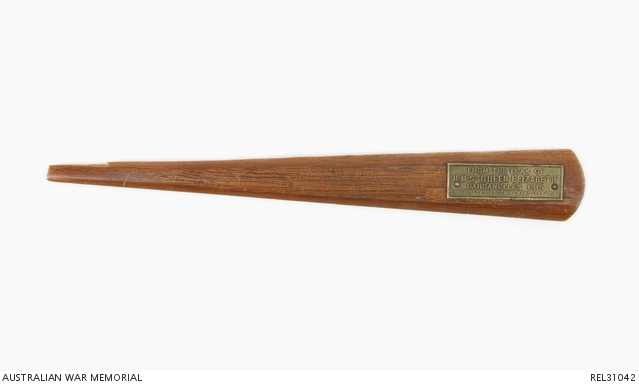 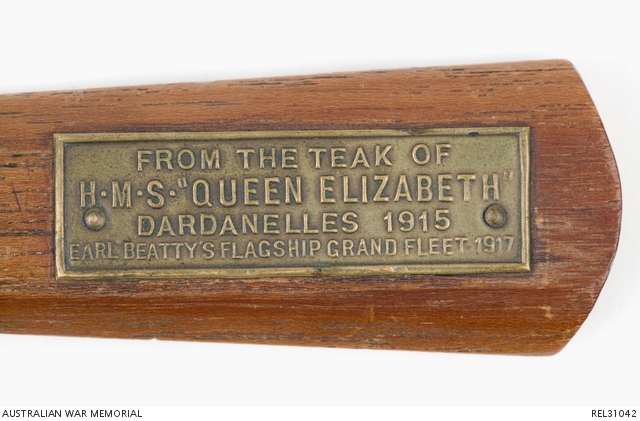 Teak paper knife with an embossed brass plaque attached to one side. The knife is rounded at the base and narrows towards the broken splintered tip. The plaque is attached towards the base end by two small nails. The embossed writing on the plaque reads 'FROM THE TEAK OF H.M.S. 'QUEEN ELIZABETH' DARDANELLES 1915 EARL BEATTY'S FLAGSHIP GRAND FLEET 1917'.

Paper knife fashioned from teak recovered from the HMS Queen Elizabeth and presented to Lieutenant Desmond John Peck in 1991. The HMS Queen Elizabeth was a battleship of the Queen Elizabeth Class, capable of 25 knots and each carrying four 15 inch guns; the first in the world to do so. Shakedown trials were just completed in February 1915 when it was sent to support the initial stages of Dardanelles campaign, arriving on February 19 and immediately going into action against Turkish forts and transporting troops for the landings, but was recalled on May 12 after the disastrous attempt of 18 March by the Royal Navy to force a passage through the Dardanelles Narrows. She later served as Admiral David Beatty's flagship. The naval terms of the Armistice with Germany were discussed aboard the battleship, which then also served during the Second World War and was broken up for scrap in July 1949. The paper knife was acquired by a British officer, Second Lieutenant Richard Vivian Taylor who had been transported to Sulva Bay by the HMS Queen Elizabeth in 1915; he passed to his Commanding Officer, Major Bernard Pearson who then presented it to Lieutenant Desmond John Peck, at the 1991 Anzac service at Cannock, Staffordshire 'as a memento linking all ANZAC Forces since the landings at Gallipoli'. VX9534 Private (later Lieutenant) Desmond John Peck served with 2/7 Battalion, AIF; born in Woollahra, NSW in January 1922, he added four years to his age when he enlisted on 15 December 1939. He trained in Palestine and was posted with Headquarters Australian Overseas Base where his age was eventually discovered but was permitted to stay in Gaza, serving as General Blamey's Batman. In 1940 he transferred to the infantry, joining 2/7 Battalion and moving to Libya in the Western Desert for further training. He saw action for the first time at Bardia in January 1941 and later at Tobruk and Derna. Peck's Battalion was transferred to Crete in April 1941; however, being on rearguard duty to cover the evacuation of troops from the island, he was captured by Austrian Alpine troops at Kalives and placed in Galatos prisoner of war camp. He escaped shortly after with the help of friends from Georgioupolos and roamed Crete for nearly a year; training groups of Cretan partisans in infantry weapons and tactics and helping coordinate the escape of many prisoners from the island by submarine. Peck contracted malaria around this time and missed two Royal Navy undercover submarine evacuations. He was eventually caught in May 1942 with a RAF radio set on his person and was taken to Italy for trial as a spy. He managed to avoid the firing squad and ended up at Bari camp PG 75 in Athens. After spending 1943 in three Italian POW camps, teaching himself Italian, he again escaped and, over the following year organised and assisted in the escape of over 1,500 allied POWs into Switzerland, for which he was awarded the Distinguished Conduct Medal (DCM). His citation reads, in part: 'At the time of the Italian Armistice he was released from Vercelli prison and immediately formed a small organisation to care for PW and sent them to the partisans. When, at the beginning of October 1943 the Germans dispersed the guerrilla force, Pte Peck arranged to evacuate PW to Switzerland. Early in November, because more funds were required, Pte Peck got in touch with the Committee of Liberation. Under their auspices he toured many districts to convince PW of the sincerity of the scheme and, during December, induced the Committee to reorganise and improve their machinery for helping PW. On 12 February 1944, Pte Peck was arrested by the Gestapo. After three months imprisonment he escaped from a working party employed at Lambrate marshalling yards ... Making his way to Intra he met members of the organisation and with their assistance reached Switzerland on 22 May 1944.'