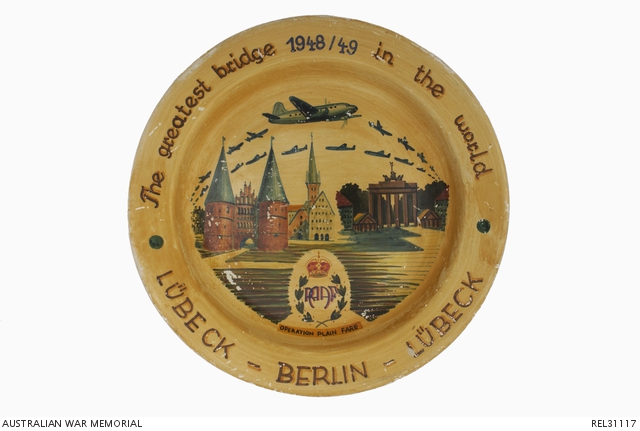 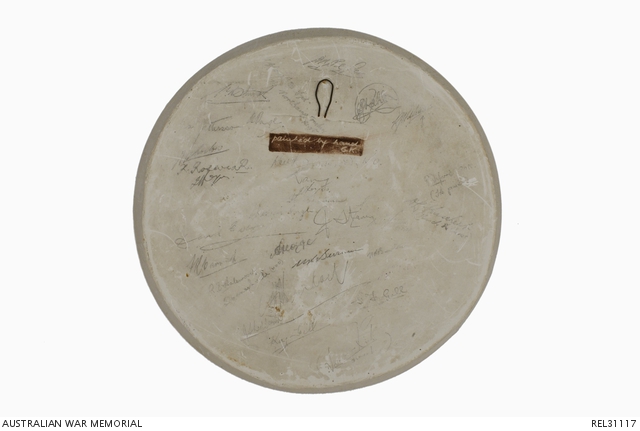 Handpainted souvenir plate with small metal hook on the back for hanging. The front of the plate is painted in yellow and depicts the ruined Berlin landmark of the Brandenburg Gate on the right and the medieval buildings of Lubeck on the left. Overhead a steady stream of aircraft fly overhead in both directions, with a Dakota painted prominently in the centre. In the foreground is the Royal Australian Air Force emblem of a wreath surmounted by a King's crown and surrounding the letters 'RAAF'. Below the emblem are the words 'OPERATION PLAIN FARE'. Around the top of the rim are the words 'The greatest bridge in the world' with the dates '1948/49' in between. Painted around the bottom of the rim is 'LUBECK-BERLIN-LUBECK'. On the back of the plate are numerous signatures scratched or written in pencil plus the painted inscription "Painted by Hand G.K."

Presented to Warrant Officer Henry 'Larry' Blackman by members of the Australian detachment to the Berlin Airlift. Blackman was born in Paddington NSW in September 1919 and joined the Royal Australian Air Force on 13 December 1937. After the Second World War, Blackman, a member of 86 Transport Wing Detachment, co-piloted Dakota aircraft as part of 'Operation Plainfare' in the airlift. The detachment participated from September 1948 to August 1949 and flew over 6000 hours, transporting 7264 tons of supplies and 8000 passengers. Blackman left Germany earlier then the rest of the Detachment as he was one of nine crew required to deliver Bristol freighter aircraft to Australia. He later served in Malaya and was discharged from the RAAF on 17 September 1951. He became a commercial airline pilot with Trans Australia Airlines and Air Niugini. He died in 1981.