"U" are wanted in the Sport's Unit 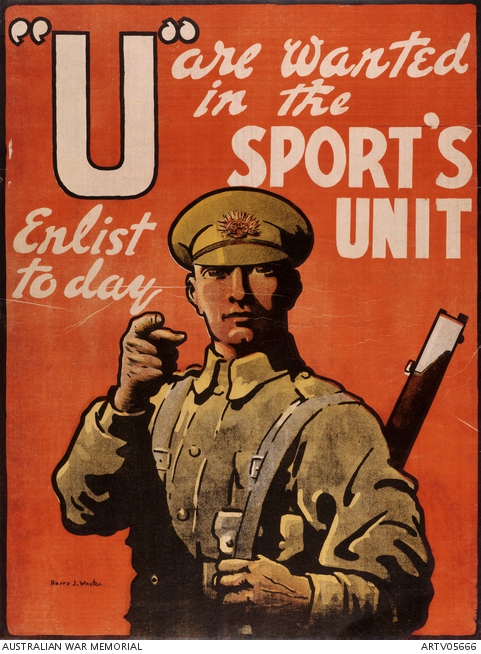 An Australian First World War recruitment poster by Harry J Weston designed to target the Australian love of sport and recruit men for a unit manned entirely by sportsmen. A soldier in full uniform set against a dramatic red background points a finger straight at the viewer, attracting our attention and thus demanding a response. As the First World War dragged on and conscription was rejected at the referendum in 1916, a concerted propaganda campaign was needed to help fill the ranks. The poster became one of the principal forms of propaganda as it was cheap, easy to mass produce, and highly visible. The States' recruiting committees selected artists with well recognised skills and previous commercial experience to design the posters. Australia relied solely on voluntary recruits to serve in the AIF. Compulsory military service, or conscription, for eligible men was in force in Australia from 1911 but these forces were for home defence and could not be used to serve in a war overseas. Harry J Weston (1874-1938) was a cartoonist, painter, commercial artist and architect. Weston was a member of many clubs and societies, and associated with many of Australia's now famous cartoonists and illustrators. He is known for drawing the cover of 'the first publication issued under the auspices of the Society of Australian Black and White Artists'.