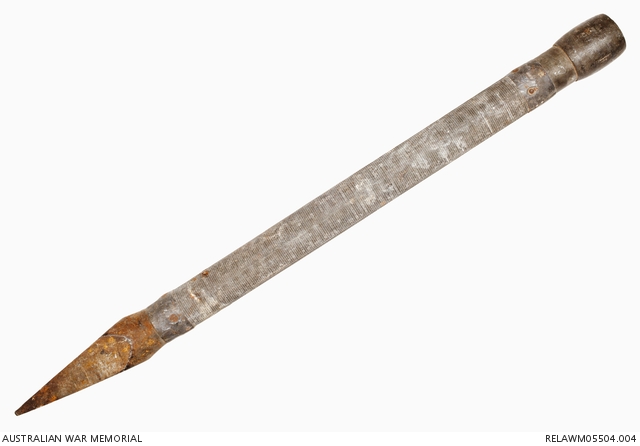 Steel pump consisting of a solid cast spearhead attached to a length of 2 1/2 inch tubing carrying perforations along its length. Brass gauze covers these holes, while an extra layer of perforated brass sheet protects the gauze. This outer sheet of brass is attached to the pipe at top and bottom with wide collars screwed to the pipe. A screwed extension valve and washer at the top end allows for further lengths of pipe to be attached.

Spearpoint pumps were a concept brought to the Sinai campaign from Australian experiences in farming and water supply in places such as outback Queensland, although there is some dispute as to the actual personality responsible.

Essentially the pump replaced the need for digging wells in the soft sand of the desert, with their attendant need for bracing materials, and instead used a drilling concept to bring water to the surface. The presence of date palms in desert depressions (called hods) pointed to the existence of underground water, and these were targetted as likely sites for boring. Silted-up wells could also be reactivated using the spearhead pump; dried river beds were also successful sources.

This section is the business end of the pump; it was driven into the sand using a sledgehammer or a crude pile-driver, while extra lengths of 2 1/2 inch tubing (up to six metres) could easily be screwed to the end until water was struck. To prevent sand from entering the tubing, several layers of brass gauze, covered with an extra layer of perforated brass sheet, protected the perforated tubing. An armoured suction hose was attached to the top to extract the water. The entire operation was relatively quick (certainly quicker than digging a well) and the apparatus could be removed once water was completed, and re-used. This example was collected by the Australian War Records Section from the Anzac Mounted Division towards the end of the war.