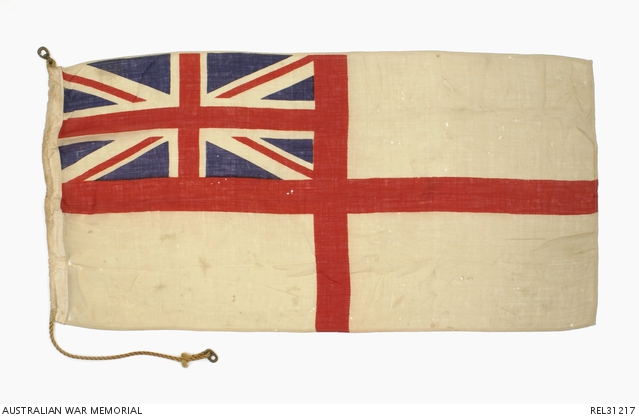 Wool bunting white ensign flown on HMAS Krait. The upper left canton section holds the Union Jack, the remaining three quarters are white with the prominent red cross of St. George in the centre. A hemp rope with metal clasps at each end runs through the flag along the hoist.

Robert Harry Easom was born at Subiaco, Western Australian on 31 May 1926. On 4 August 1943, at the age of 17, he joined the Naval Auxiliary Patrol (NAP). Sailing on converted private launches the NAP patrolled the inner and outer harbours of Fremantle and Rottnest and Garden Islands. Easom served with the NAP for about 12 months aboard MV Gladmor, which sank after a fuel leak caused a fire, and the vessels Viking and Hiawatha. He then volunteered and was accepted into the Services Reconnaissance Department (SRD) in November 1944, based at Garden Island. He participated in one man submarine training and then joined the company of HMS Eduardo, a converted Italian fishing boat commandeered by the Royal Navy. Eduardo sailed from Fremantle in early 1945 and arrived in Darwin, having survived a fire south of Geraldton. On arrival in Darwin, Easom transferred to the Krait and was involved soon after in an operation to Timor, referred to as Operation Sunlag. The purpose of the mission was to collect two SRD operatives. However due to mismanagement by the officers in charge, the mission failed and the Krait returned to Darwin. After the Japanese surrender the Krait was sent to Ambon and used as transport for intelligence gathering missions to islands in the area including Buru, Aru, Ceram, Banda and Saparua. During this period the Krait carried several Japanese prisoners as well as army survey teams and a naval intelligence officer. At Ambon the boat acquired a monkey as a mascot. He was named Peter and had lost his tail. Peter remained with the crew until the Krait finished her service and was towed to Morotai. The Krait was then sailed to Labuan where she was handed over to the British Borneo Company and Easom souvenired the ensign. Easom and the rest of the crew returned to Perth and he was demobilized from the Royal Australian Navy at HMAS Leeuwin Shore Depot, Fremantle on 9 July 1946.