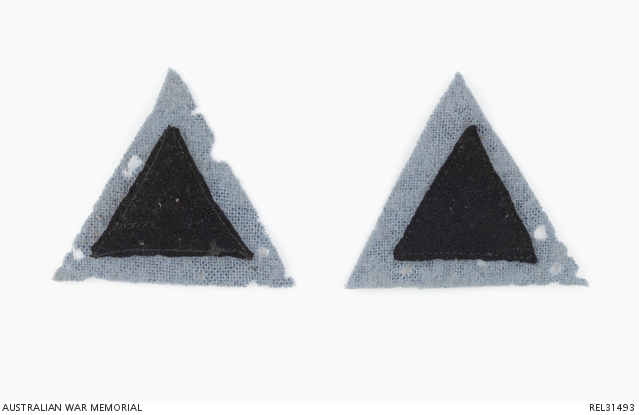 Pair of black triangular colour patches on a grey background of the same shape, for Headquarters Guard Battalion.

Worn by NX20628 Private John Henry Buik who served in Headquarters Guard Battalion during the Second World War. Buik was born in Hay, NSW in 1902 and enlisted for service on 6 June 1940. He saw action in the Middle East but was captured in Greece. In July 1941 he sustained a battle injury and for a short period was listed missing in action. By November 1941 he was confirmed a prisoner of war (POW) interned at Stalag 8B with the POW number 92010. He was later transferred to Stalag 344 at Lamsdorf where he was held for the remainder of the war. In July 1945 he returned to Sydney and was discharged on 14 August 1945.