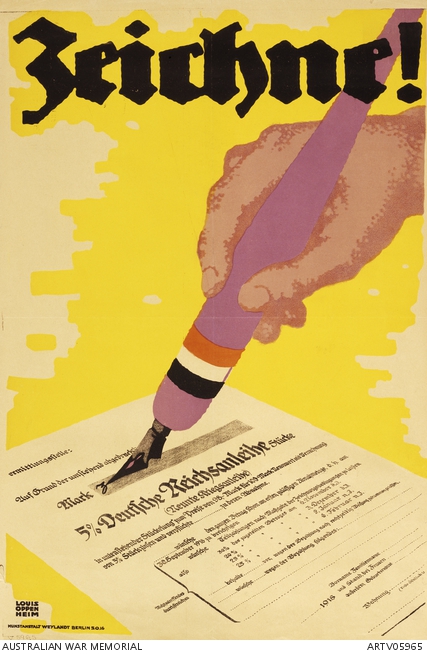 First World War German poster depicts a hand holding a pen, filling in an application form to subscribe to the Ninth War Loan. The German text exclaims; 'Sign!'. Louis Oppenheim (1879–1936) was a German graphic artist, painter and type designer. He studied in London from 1899 to 1906. He moved to Berlin and started his work as a graphic artist in 1910, signing his work with his initials, "LO" and working for clients such as AES, the Reichsbahn, Persil and Adrema. His posters are considered a significant product of the 'Berlin poster style'. Oppenheim worked for the type foundry Berthold and created a handful of significant and widespread typefaces, all of which share modernist characteristics, such as Lo-Type and Fanfare which are still in wide use today. German poster design during the First World War was intended to be simple, graphic and visually arresting. In German posters, words and images were integrated and the essense of communication conveyed through powerful shapes and patterns. They often also extolled an overt nationalism, with the preference of the authorities being for wordy slogans which encouraged people to contribute to the war economy