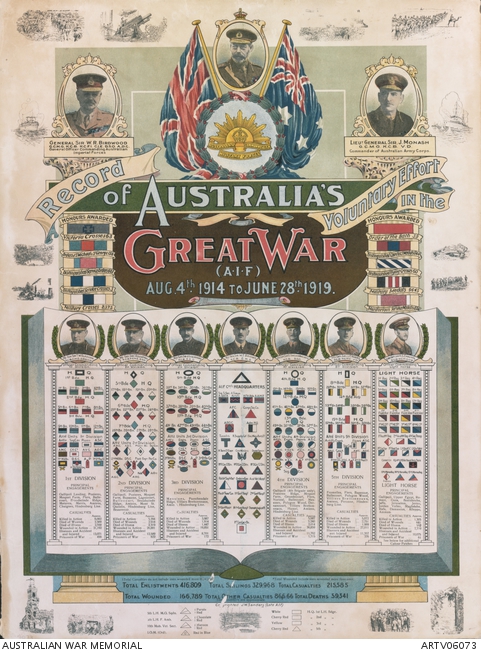 A commemorative colour poster published c.1920 as a record of Australia's voluntary effort in the Great War. The composition is similar to that of an Honour Roll and features in the top centre a depiction of the rising sun badge within a wreath. A framed portrait of King George V is positioned above the badge with the union jack flag to the left and the Australian flag to the right. On either side of the badge are two pillars. At the top of the left pillar is a portrait of General Sir W.R. Birdwood, Commander of the Australian Imperial Forces and at the top of the right pillar is a portrait of Lieutenant General Sir J. Monash, Commander of the Australian Army Corp. Both pillars are adorned with ribbon banners bearing the names of military honours and the number awarded to the AIF. The title is inscribed in a large banner between these two pillars. In the lower half is a depiction of an open book. Inscribed on its pages are a listing for each Australian Division, the Light Horse and the AIF Corps Headquarters. Each listing is headed with a portrait of the Division's Commanding Officer, and includes a depiction of all the Division's colour patches, followed by a listing of the Division's principal engagements and a summary of causalities suffered.