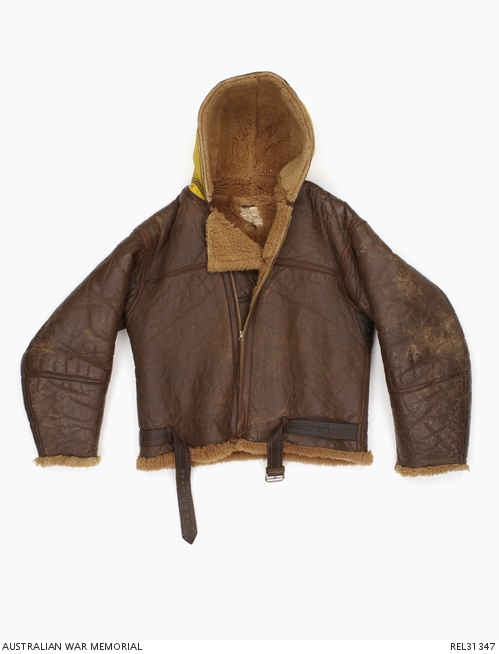 Brown leather thermally insulated 'Irvin' flying jacket lined with a thick layer of brown pile fleece. The jacket has long sleeves with zippers running from the wrist to the elbow along the inner arm. A triangular leather patch with eight metal ventilation eyelets is located under each armpit. The jacket fastens by a brass zip up the centre, and a belt with a nickel plated buckle at the waist. When turned up, the large fur lined collar forms a hood, the outer leather surface of which is painted yellow as an aid to visibility. A white cotton makers' label inside the collar is printed with size details and has two handwritten names in black ink; 'W P. RYAN', which has been crossed out, and 'L/LT. K.G. ROBERTSON 423408'. Above the label is a leather hanging loop which has pulled loose at the left hand end.

Kenneth Gordon Robertson was born at Merungle Hill, NSW, in February 1921, son of an Australian Army Nursing sister and a soldier of the 1st AIF, who had become soldier settlers. After education at Yanco Agricultural High School, he was employed by the Rural Bank, and also served part-time with 56 (Militia) Battalion at Leeton. Aged 18 when the Second World War commenced in 1939, Robertson remained in Militia service until 1942, at which time he volunteered for aircrew training in the RAAF. Selected to become a pilot, with the service number 423408, he completed his initial flying training at Temora, NSW, before sailing to Canada to continue his instruction as part of the Empire Air Training Scheme (EATS) with 7 Service Flying Training School (SFTS) near Lethbridge, Alberta. After graduation as a pilot in July 1943, Robertson was selected for further training in the United Kingdom to become a member of the RAF's elite 'Pathfinder Force'. After this training, he was posted to 97 (Pathfinder) Squadron, RAF, based at Coningsby, in Lincolnshire, as a Lancaster pilot, and completed a tour of operations with this unit. Returning to Australia with the rank of flight lieutenant, he was discharged in September 1945. Ken Robertson returned to Merungle Hill, where, as a successful citrus grower and turkey farmer, he became involved in many local community associations and charities. He died in April 2001. This Irvin jacket was worn by Robertson during his tour of operations. It has an unusual yellow painted integral fold up hood of the type normally associated with Coastal Command or Fleet Air Arm aircrew.