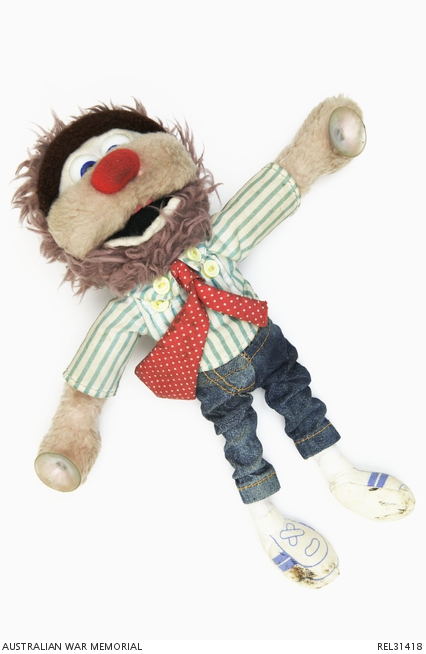 Mascot of Australian children's television character 'Agro' carried by the embarked Seahawk helicopter aboard HMAS Darwin. The doll is of roughly human proportions, the arms and head being covered with pink and brown synthetic fur. The face is of synthetic felt with a black mouth, white teeth, pink tongue and red nose. The eyes are white plastic balls with blue and black painted pupils. At the ends of the arms are clear plastic suction cups. 'Agro' is clothed in hand made blue denim trousers and a white spotted red neck tie. His short sleeved shirt is of green and white striped cotton with a button down collar and a pair of pleated breast patch pockets. It is secured at the rear by a pair of Velcro tabs. Beneath the clothing are hand drawn genitalia in black ink and the words 'SHARK 07 WAS HERE!' in blue ballpoint pen.

Mascot of Australian children's television character 'Agro' carried by the embarked Sikorsky S-70B Seahawk helicopter aboard HMAS Darwin during the war on Iraq, 2003. The mascot, along with a 'Fosters' beer mat, (REL31419) were displayed on the dash of the helicopter, to ensure that no confusion existed as to the nationality of the crew. The Seahawk itself was known among Coalition units as 'Agro'. The pen marking from 'Shark 07' on the mascot's back is a reference to the call-sign of the Westland Sea King helicopter carried by HMAS Kanimbla.