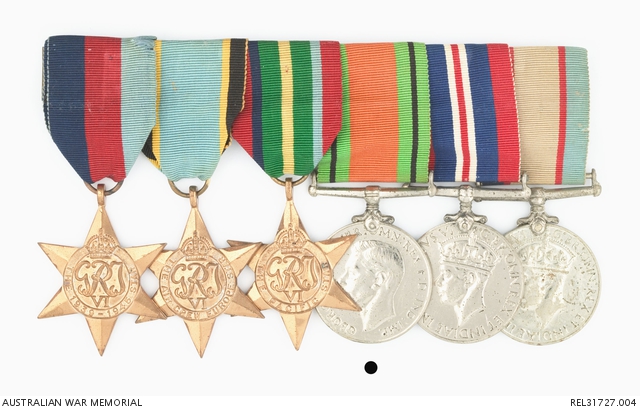 403682 Flight Lieutenant John Ross Austin was born in Cloncurry, Queensland in 1919. He enlisted in the RAAF as a leading aircraftman in March 1941 and trained at No 2 Wireless Air Gunnery School at Parkes, NSW, and then at No 1 Bombing and Air Gunnery School a Evans Head, NSW, qualifying as an Wireless Air Gunner with the rank of sergeant on 17 October 1941. Austin transferred to Bomber Command in England to undergo further training early in 1942. His first operational posting was to 156 (Pathfinder) Squadron RAF in September 1942. In November he transferred to 460 Squadron RAAF, flying Lancaster bombers. His first operational flight with the squadron, to Mannheim in Germany, was in the bomber 'G George' (now in the collection of the Australian War Memorial) but he flew in other aircraft for the rest of his tour. Austin undertook missions to Hamburg, Cologne, Wilhelmshaven, Nurnberg, Berlin, Essen, Munich, Stuttgart, Duisberg, Stetten and Dortmund, all in Germany; to Turin, La Spezia and Milan in Italy; to L'Orient and St Nazaire in France; and to Pilzen in Czechoslovakia. In July 1943 he was sent for officer training, graduating as a pilot officer (later flight lieutenant) in October of that year. Austin returned to Australia in February 1944 and undertook training at East Sale in Victoria before being posted to 13 Squadron , RAAF, at Gove in the Northern Territory, flying Ventura bombers. Austin made only a few operational flights with this squadron, to Labuan, Biak and Morotai in August 1945. He was discharged on 1 February 1946.