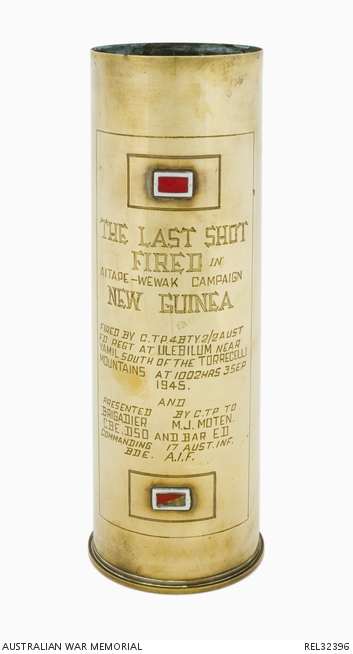 Brass 25 pounder shell case engraved with 'THE LAST SHOT FIRED IN AITAPE-WEWAK CAMPAIGN NEW GUINEA FIRED BY C.TP.4BTY.2/2 AUST FD REGT AT ULEBILUM NEAR YAMIL SOUTH OF THE TORRECELLI MOUNTAINS AT 1002HRS 3 SEP 1945. AND PRESENTED BY C.TP TO BRIGADIER M.J. MOTEN. CBE.DSO AND BAR ED COMMANDING 17 AUST.INF. BDE. A.I.F.'. Above the inscription is an enamel colour patch of Headquarters 17 Australian Infantry Brigade, and below is an enamel colour patch of the Royal Australian Artillery 6 Australian Division, however the blue section of this colour patch is missing. Stamped on the base of the shell case is '25 PR II 292 MC (broadarrow) 1942 CF'.

This shell case commemorates the last shot fired in the Aitape-Wewak campaign by C Troop 4 Battery 2/2 Australian Field Regiment on 3 September 1945. The shell case was presented to SX2889 Brigadier Murray John Moten CBE, DSO and Bar following his command of 17 Australian Infantry Brigade during the Aitape-Wewak campaign in New Guinea. Brigadier Moten was born in Hawker, South Australia on 3 July 1899 and was commissioned in the Commonwealth Military Cadet Corps in August 1916. He enlisted with the AIF on 23 August 1917; however he was discharged as medically unfit in January 1918, due to flat feet. Moten later resigned from the Cadet Corps and went on to serve with the Militia before he was seconded to the AIF and placed in command of 2/27 Battalion on 26 April 1940. The battalion saw service in Egypt and the Middle East and Moten was mentioned in dispatches and awarded the Distinguished Service Order for his ‘excellent leadership and gallantry’ at the capture of Saida. After being promoted to colonel and temporary brigadier on 27 December, Moten took command of 17 Infantry Brigade from Brigadier Stanley Savige. In October 1942 the brigade left Australia for Milne Bay, Papua and also served at Wau and Salamaua. In 1944 Moten and his men spent time resting and training in Australia before returning to New Guinea in November for the Aitape-Wewak campaign. The campaign ended in August 1945 and Moten returned to Australia where he took command of 6 Division in November. He returned to civilian life in January 1946 but led the Australian Army contingent in the Victory parade in London. From 1948 to 1952 he commanded 9 Brigade, Citizen Military Forces and was promoted to brigadier on 1 January 1949. He was appointed an honorary member of 27 Battalion in 1952. In 1953 he served as aide de camp to the Governor General. Moten died of a heart attack on 14 September 1953 aged 54 years. He was buried in Centennial Park Cemetery in Adelaide with full military honours.