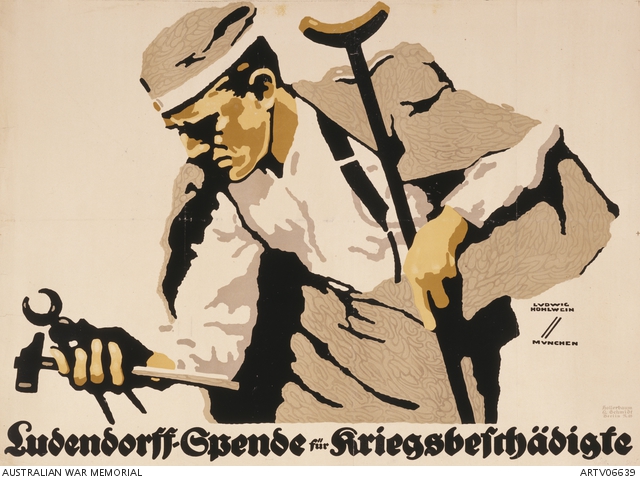 First World War German poster depicting a wounded veteran holding a hammer and pincers in his right hand and a crutch in his left. The poster asks people to give to the Ludendorff Fund for the War disabled. The German text on the poster translates as ; ''give to the Ludendorff Foundation for war invalids'. The Ludendorff Foundation was named after General Erich von Ludendorff (1865-1937), a German general, victor of Liège and of the Battle of Tannenberg. From August 1916 his appointment as Quartermaster general made him joint head (with Paul von Hindenburg), and chief engineer behind the management of Germany's effort in World War I until his resignation in October 1918. After the war, Ludendorff became a prominent nationalist leader. Money raised through the Ludendorff Fund provided welfare and assisted in the rehabilitation of disabled German First World War soldiers. Ludwig Hohlwein (1874-1949) was a German poster artist. He was trained and practiced as an architect until 1906 when he switched to poster design. Hohlwein's adaptations of photographic images was based on a deep understanding of graphical principles. He developed a creative use of color and compositions. Hohlwein's most artistically important phase was before World War II in the years 1912-1925. He developed his own distinct style with sharply defined forms, bright colors and often included humor. After the First World War he designed travel and political posters, finishing his career by designing posters characterised by their heavy brutality for the Nazis during the Second World War.