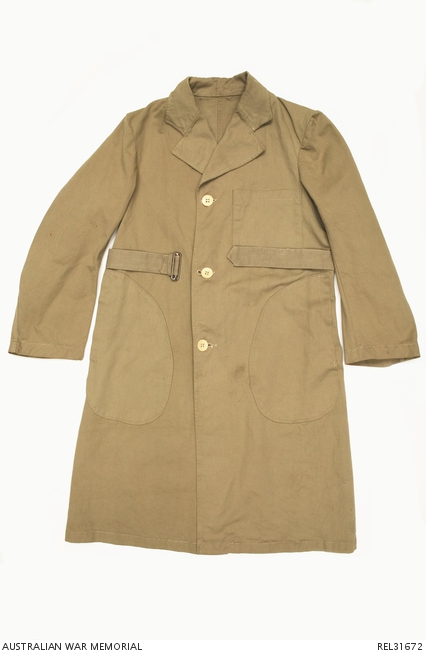 Khaki drab dust coat with long sleeves and a fold down collar. The coat has two large rounded patch pockets sewn below the waist with openings on the side. A small square patch pocket is sewn on the left breast. This pocket has been divided to form a thin pen pocket on one side. The coat is fastened with three cream plastic buttons down the front and a fabric belt with a chrome plated steel buckle. A small white label is sewn inside the bottom left of the jacket and is printed in blue 'N268 1944. SIZE SM Made in Australia'.

Dust coat worn by 3658 Warrant Officer Andrew John Kelso, Royal Australian Air Force. Born in Albury in October 1915, Kelso joined the RAAF before the outbreak of war on 15 August 1938, aged 22. During the war he served in Australia and on bases in New Guinea and the Pacific with a number of squadrons, including 11, 12, 13, 14 and 20 Squadrons. He underwent training as a wireless operator and air gunner, and also worked installing radar stations and operating transmitting stations and cypher equipment. He remained in the RAAF until 1948 and was discharged on 11 October from East Area Headquarters at Bradfield Park.