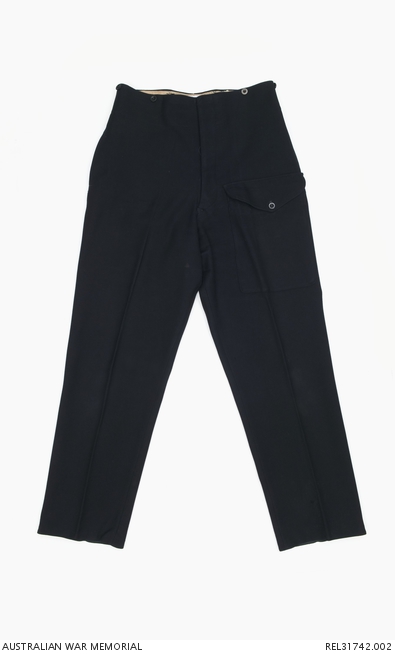 Royal Navy black heavy woollen twill battledress trousers with concealed six button fly closure. The trousers have two side pockets and an inset back pocket on the right hand side secured by a button flap. There is also a large patch pocket on the left hand thigh with a flap secured by a black plastic button. The inner waistband is lined with light grey cotton fabric, and the pocket linings are made of the same material. The outer waistband has six buttons placed around it for the attachment of braces. Below the rear waistband are a pair of buttons for attachment to the battledress blouse.

Royal Navy battledress uniform worn by Lieutenant Harold F Chandler, Royal Navy Volunteer Reserve, while serving with 849 Squadron, Fleet Air Arm. In April 1944, the squadron commenced operations from Perranporth, in Cornwall, flying Grumman Avenger aircraft in support of the impending D-Day landings in France. In September 1944, the unit moved to the Far East, and was embarked on the aircraft carrier HMS Victorious as part of No 2 Naval Strike Wing. Lt Chandler completed some 50 operations as an observer with 849 Squadron, and was involved in attacks on oilfields in the Dutch East Indies and against the Japanese home islands. This is the uniform worn by him during the D-Day operations of April-September 1944. The shoulder boards fitted to the battledress blouse are those of the Royal Naval Volunteer Supplementary Reserve (RNVSR) in which Lt Chandler served after the war. He later emigrated to Australia, in 1957.