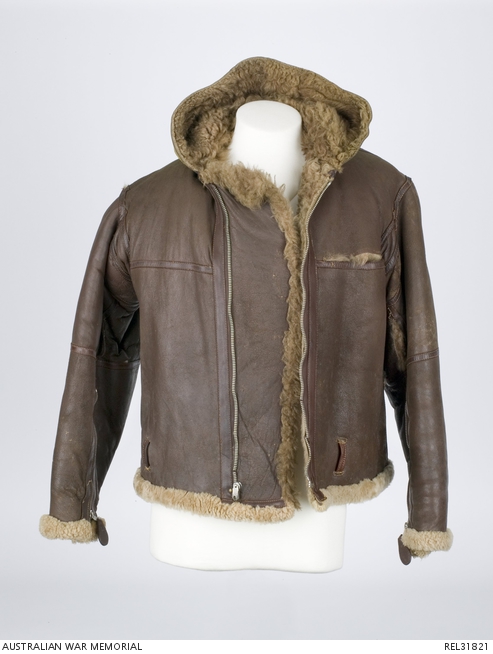 Brown leather flying jacket lined with wool fleece. The jacket has a yellow hood, also lined with wool fleece, and long sleeves with zippers running from the cuff to the elbow along the inner arm. A triangular leather patch with eight metal ventilation eyelets is located under each arm and the jacket fastens by a brass zip up the centre. A maker's label on the inside of the jacket below the hood, has a crown with the letters 'A.M' beneath and the details of the wearer below that: 'Contract No. 4636 / Size: 3 / Height: 5'7" - 5;9" / Chest: 34-36 / Waist: 30-32'.

Associated with the service of 401908 Flight Lieutenant Peter Abernethy Coldham. Born in Sydney, NSW in 1919, Coldham studied law at Melbourne University and was a member of the Melbourne University Rifles prior to his enlistment with the Royal Australian Air Force in April 1941. Soon after enlisting, Coldham was attached to the Royal Air Force, undertaking training in Rhodesia before proceeding to the United Kingdom and flying with 460 Squadron, including twice piloting the aircraft G for George, now held at the Australian war Memorial. He later served with 156 Squadron. In October 1943 whilst at the rank of Pilot Officer, Coldham was awarded the Distinguished Flying Cross (DFC). He was awarded a Bar to the DFC, in February 1944 and subsequently promoted to the rank of flight lieutenant. Coldham was discharged from service in January 1946.