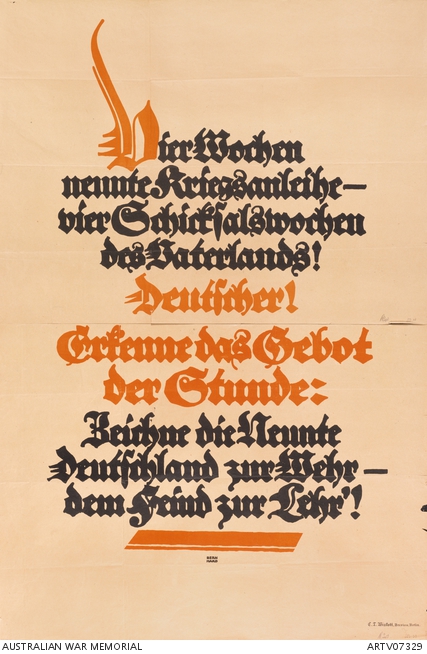 German First World War poster , which translates as; 'Four weeks, ninth loan, four weeks of destiny for the German Fatherland. Know the order of the hour, Sign the ninth German for defence, to teach the enemy!' . The poster seeks subscribers for the Ninth War Loan, for the 'Fatherland'. Lucien Bernhard (1883-1972) was born Emil Kahn and later became known as Lucien Bernhard. He was a designer and worked in Berlin from 1905-1923 and then in America from 1923 until his death in 1972. Essentially self-taught, he received some instruction at the Akademie der Kunst in Munich. In 1905 he won a poster design competition for Priester matches, launching his career. Bernhardwas a master of lettering, and his typefaces were produced commercially. The majority of his First World War posters, for war loans and charities, were purely typographical. His 1913 Franktur typeface, a revival of the Gothic script of the Middle Ages, asserted a defiantly German identity. In 1920 Bernhard was appointed First Professor of Poster Design at the Akademie der Kunst in Berlin. He left after three years for New York, where he designed further typefaces and advertising posters and developed corporate identity programmes. After the Second World War Bernhard moved away from advertising and concentrated on painting.