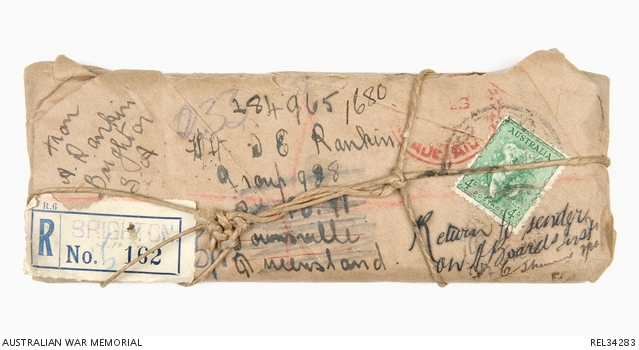 Small black plastic comb with two teeth widths.The top of the comb has a small circle mark on the right hand side and a makers mark, printed in gold lettering which reads 'MADE IN ENGLAND'. The comb is wrapped in its original white tissue paper and cardboard, as well as the brown package it was posted in. The cardboard has Christmas sticky tape around it with holly and the words 'SEASONS GREETINGS' written in red on a gold background. The brown paper has the address, return address and a green stamp with a koala on it. It also has a postmark sticker from Brighton, South Australia and the hand written words 'Return to Sender' on the lower right hand corner. There are five stamps on the reverse of the package, stating where and when the package was received. The package is tied up with brown string.

This comb was sent to Flight Lieutenant (Flt Lt) 284965 Donald Edward Rankin of South Brighton, South Australia. The comb was a gift from Flt Lt's Rankin's wife, Annie in 1943, possibly a Christmas gift. Rankin managed a wine company in Morphett Vale, South Australia prior to enlisting in the Royal Australian Air Force on 30 March 1942 in Melbourne, Victoria. He was posted to 7 Transport and Movements Office at Vivigani Airfield on Goodenough Island, New Guinea. Rankin was killed in a ground accident on 20 December 1943, aged 45. Mrs Rankin was unaware that he had been killed when she sent the parcel to him. His father, Private 633 John Edward Alexander Rankin, 12 Battalion, had been killed during the Gallipoli landing on 25 April 1915.