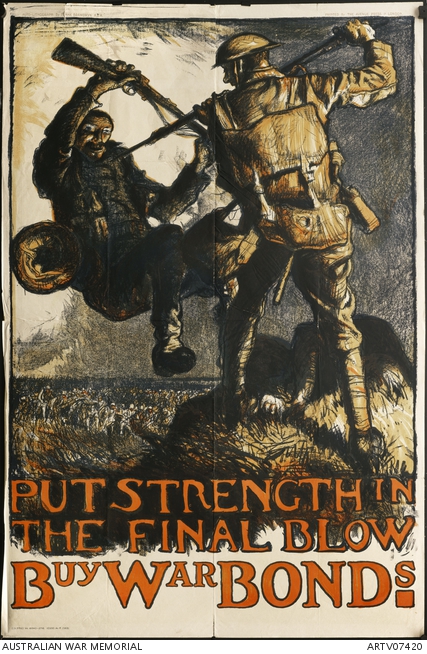 A First World War British Army poster appealing for people to buy war bonds. It depicts a British soldier attacking and bayonetting a German soldier, while a massed attack goes on in the background. This grim poster of a 'Tommy' (British soldier) bayoneting an enemy soldier caused deep offence in both Britain and Germany. As Brangwyn was born in Belgium, he identified closely with its fate during the First World War. His design for this recruitment poster was initially rejected by the War Office as too explicitly horrific, but it drew huge numbers of recruits and was reprieved. The design for 'Put Strength in the Final Blow' was commissioned toward the end of the conflict by the National War Savings Committee. It invited the viewer's contribution to the fight by placing him in the position of the British soldier, and thereby expressed very powerfully how the money from War Bonds could assist toward the final victory. Such was the impact of the poster that the German emperor, Wilhelm II, is said to have a put a price on Brangwyn's head.