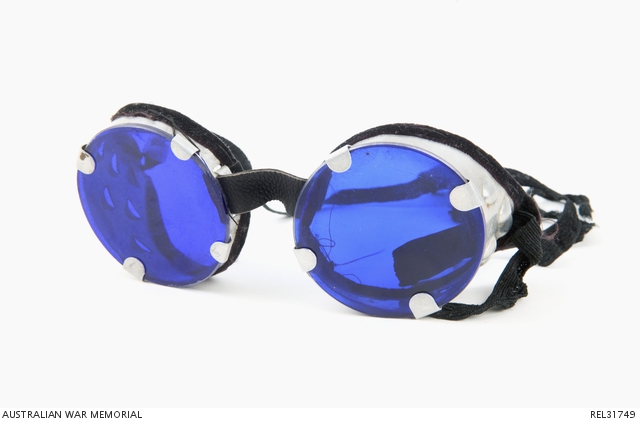 Pair of blue glass goggles held into aluminium side pieces by four aluminium clips. The side pieces extend to protect the side of the eye and each have five inset slits for ventilation. Each side piece is stamped with vertical lettering 'BRITISH' within a diamond, and is edged with black velveteen to allow a close fit. The lenses are connected by a strip of black leather that is clipped into the side pieces. A black elastic adjustable strap secures the goggles to the head.

Gordon Binns was born in 1899, and began his compulsory cadet service in March 1913. In February 1917, aged 18, he enlisted in the AIF, becoming number 712 in the 13th reinforcements to 2 Machine Gun Company. After sailing to England on the 'SUEVIC', he was sent in March 1918 to reinforce 6 Infantry Battalion, but almost immediately transferred back to 1 Machine Gun (MG) Battalion, of which 2 MG Company was a part. Binns was wounded in action on 10 August 1918 when his unit was supporting the Australian attack on Lihons, and spent over a month in hospital. Upon release, he was again transferred, this time to the Australian Provost Corps, where he served out the remainder of the war. Binns returned to Australia in 1919 and made a career in banking. During the Second World War he was manager of the Cobram (Victoria) branch of the State Savings Bank, where he encouraged customers to purchase War Savings Certificates. Gordon Binns died in 1976. The goggles formed part of his 'Home Defence' kit during the Second World War.