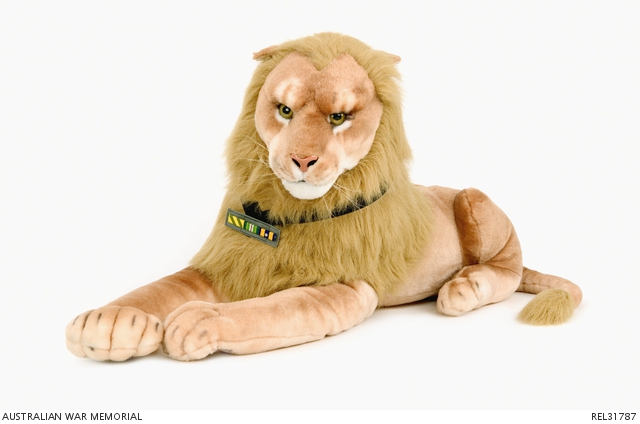 Large stuffed toy lion in a crouching position. The lion has a collar made from a sailor's black cap tally bearing gold woven lettering 'H.M.A.S. DARWIN'. A grey plastic tag is sewn to the front of the collar and bears a medal ribbon bar for the Conspicuous Service Cross, Australian Active Service Medal (1975 - ) and Defence Forces Service Medal with rosette.

During deployment to the Persian Gulf from its homeport at Garden Island, WA, HMAS Darwin's Sonar Dome was holed and needed urgent repairs (reported as an urgent defect 'URDEF'), which slowed down the ship's arrival in the Operation Slipper area of operations in the Gulf. After several days of frustration regarding the defect and communications regarding the options for its repair, the Commanding Officer (CO), Commander Aaron Ingram, was heard to say one morning, 'I'm going to my cabin to kick the ship's cat!'. While emergency repairs were carried out at Fujairah, port of the United Arab Emirates, the Darwin's Flight Commander, Lieutenant Commander (LCDR) Marc Pavillary, and Weapons Electrical and Engineering Officer, LCDR Adam Gilbert purchased a large stuffed lion and presented it to the CO as the ship's cat. Named 'URDEF', the lion wears his owner's medal ribbons, and remained on board the Darwin from November 2002 to December 2003 when Ingram was posted off the ship.