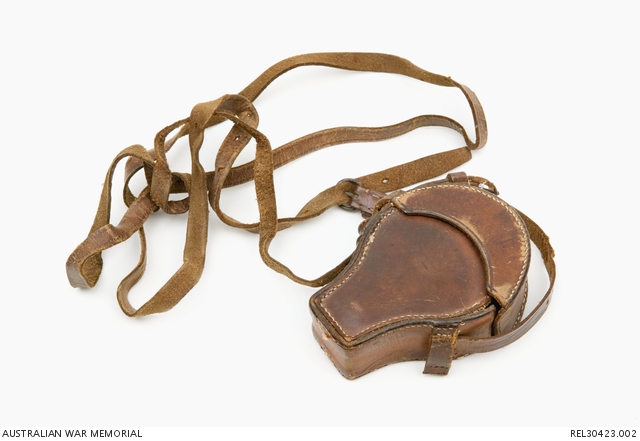 Brown leather storage case for a Flavelle, Roberts and Sankey prismatic compass. The case has a similar shape to a common light bulb. The interior is lined with faded red velvetine. The lid is crescent shaped and hinges to one side via a tongue of leather. The lid is secured by a small leather strap with a steel buckle. The case comes with an adjustable leather carry strap.

This prismatic compass is associated with the military service of 524, Lance Corporal John Dodd Mack. Mack fought at Gallipoli, Sinai, Palestine and Syria during the First World War. He was born at Lismore in New South Wales and was educated at Geelong College, Victoria. He worked as a Manager at Berry Bank Station in Victoria before enlisting with the 8th Light Horse Regiment, AIF, on 6 January 1915. On 22 April 1917 he was accepted as a member of the 3rd Light Horse Brigade scouts and served with them for the duration of the war and later in March 1919 during the Egyptian rebellion. He was promoted to Lance Corporal on 3 December 1917 and was wounded in action at Es Salt in Palestine on 3 May 1918. He returned to Australia aboard the troopship 'Dorset' on 11 June 1919 and was discharged from the AIF on 11 August 1919.