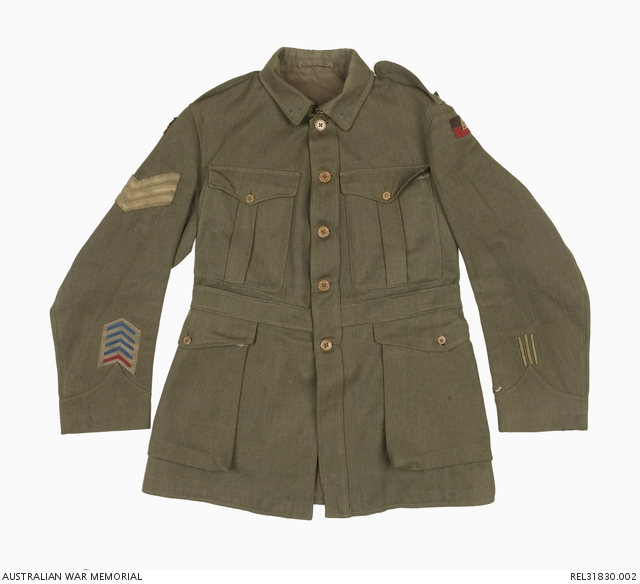 Custom made service dress tunic. The tunic has the colour patches of 7 Battalion on each sleeve with the brass 'A' for Gallipoli veterans. There are two brass 'AUSTRALIA' shoulder titles and four blue and one red service chevrons on the right sleeve, indicating years served. There are also three sergeant's stripes on the right shoulder. There are three metal wound stripes near the left hand cuff. The jacket fastens with five brown plastic buttons, which are also used to fasten the two breast pockets and the two lower pockets. The jacket is lined with brown cotton, whilst the inside of the sleeves is lined with white. There are a few small tears in the outer fabric of the jacket.

Sergeant James Reginald Matthews had this tunic custom made for his wedding in April 1918 and it appears to have been worn post-war. Matthews, a salesman from Melbourne, Victoria, enlisted as a private in 7 Battalion on 17 August 1914, aged 24 years. He was assigned the service number 50 and embarked from Melbourne on board HMAT Hororata on 19 October 1914, arriving in Egypt on 2 December. Matthews took part in the second wave of landings at Gallipoli on 25 April 1915 and received a bullet wound to the shoulder. He was evacuated to hospital in Heliopolis. On 9 May 1915 he went to a convalescent camp prior to his return to 7 Battalion on 22 June. Matthews was wounded in the back for a second time on 12 August at Lone Pine and was sent to hospital in Malta, aboard HS Regina de Italie. Matthews was admitted to hospital also suffering shock and enteric fever on 2 September 1915. He was then transferred to England and admitted to hospital in Birmingham on 29 October 1915. Matthews was promoted to temporary corporal on 1 November 1916 and sent to France for court martial duty on 7 July 1917. He returned to England and was promoted extra regimental sergeant on 1 September 1917. He then began working for the pay corps. He married an English woman named Caroline on 13 April 1918 (the wedding portrait is held at P04219.001) and they returned to Australia aboard ‘Balmoral Castle’ on 25 February 1919. They arrived in Melbourne on 13 April and Matthews was discharged on 25 May 1919.