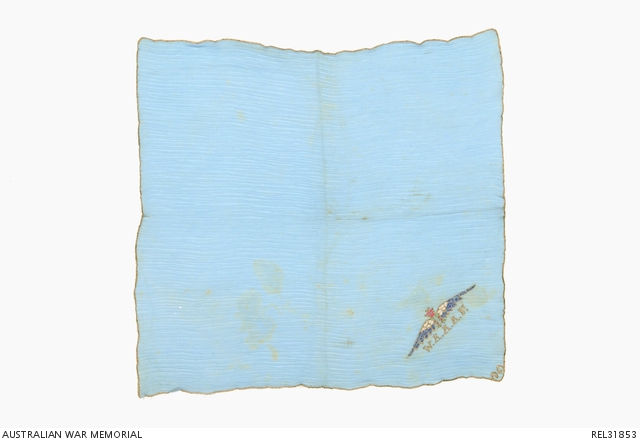 Souvenir blue silk crepe handkerchief with a painted gold edge. The handkerchief is painted in one corner in blue, white, red, green and gold, with a pair of RAAF wings superimposed by a King's crown, with 'W.A.A.A.F.' written beneath in gold. The gold edge extends in a circular pattern around the badge design in the corner.

Associated with the service of 100358 Aircraftwoman Doris 'Dorothy' Margaret Miller. Miller was born in Toowoomba, Queensland, in 1919. She married QX15787 Corporal Alexander Malcolm Miller on Christmas Eve 1941. Her brother, Robert Eric Fraser had enlisted in the RAAF in March 1941, and qualified as a sergeant pilot. As a result, Dorothy wanted to enlist with the Women's Auxiliary Australian Air Force (WAAAF). In recognition this, her brother gave Dorothy this souvenir embroidered WAAAF handkerchief. Dorothy wanted to be a radio operator as her husband was serving in this capacity with 2/5 Australian Armoured Regiment. Dorothy was told that it would be advisable to have some proficiency in Morse code before she enlisted so that she would be accepted for training in her chosen field. As her husband had been posted away Dorothy returned to her family home in Toowoomba to undertake a course in Morse code. On 7 April 1942 her brother returned to Toowoomba, flying over the family home to let them know that he had returned safely from his latest mission with 23 Squadron. However shortly after doing so, his plane exploded in mid-air and crashed only two miles from the airfield. From their home his family heard the explosion and could see the smoke from the fire. Although she wanted to enlist in the WAAAF immediately, Dorothy’s grief over the death of her brother made it difficult for her to learn Morse code to the necessary speed. She also had to support her mother who was devastated at the death of her only son. Dorothy finally enlisted in the WAAAF on 26 June 1942 but was discharged on 8 October of the same year, when she became pregnant, after her husband came home on weekend leave.