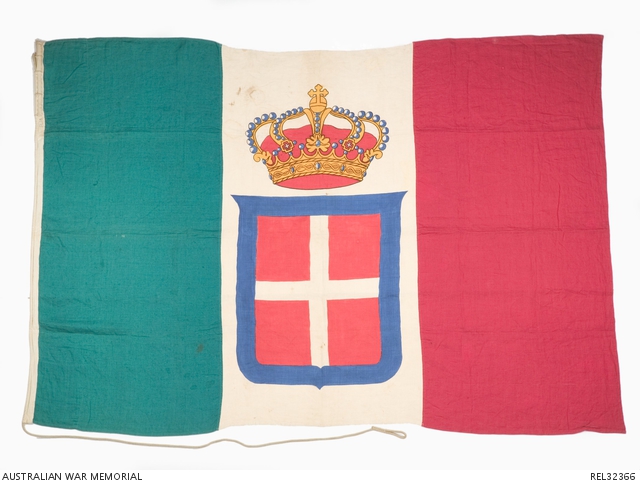 Italian naval ensign taken from Tobruk. The linen flag is an Italian tricolour printed in even vertical stripes of green, (nearest the hoist) white and red. In the central (white) stripe are printed the Arms of Savoy, a blue bordered red shield, quartered by a white cross. Above the arms is a printed crown in black, red, gold and blue. The hoist, which is made of cream coloured canvas stamped in black with the markings 'R.M.' (probably for 'Regia Marina' - the Italian Navy) and '4. gr', has a sewn-in hemp halyard with 150 cm of free rope ending in a loop at the bottom. The top of the hoist is reinforced with a sewn-in 29 cm length of dowel. Both corners at the hoist are also reinforced with a second layer of linen.

Italian naval ensign taken from the mast outside Navy House, Tobruk, on 22 January 1941. The naval ensign ('Bandiera da Guerra') is distinguished from the standard Italian national flag of the period 1861-1946 by having a crown above the Arms of Savoy which appear in the central stripe. The flag was removed by NX14254 Corporal Eldrick Stuart 'Larry' Grant of 2/4 Infantry Battalion, AIF, who ran his Australian slouch hat up in its place. (See photograph 005414 for an image of Grant climbing the pole.) Grant was born at Charleville in Queensland, in 1919, but was living at Canowindra, NSW, prior to his enlistment in May 1940. He served with 2/4 Battalion (6th Australian Division) throughout the campaigns in Libya, Greece and Crete, but later transferred to 2/17 Battalion (9th Australian Division) and was wounded at Tel el Eisa. When 2/17 Battalion returned to Australia in February 1943, he brought the flag home with him. In September that year, Grant participated in the battalion's landing at 'Red' Beach, Lae, on the northern coast of New Guinea. Later in the same month, the unit made another amphibious assault, this time at 'Scarlet' Beach, in an attack intended to cut off and capture the important town and harbour of Finschafen. The most important feature in the control of this region was the Sattelberg Mountain, a 975 metre height which overlooked Finschafen and the surrounding country. On the morning of 9 October 1943, Larry Grant lead his section of 10 Platoon, B Company, in an attack on the position known as the 'Knoll', which dominated the Sattleberg track south west of Jivevaneng. The attack was a success, but Grant was wounded by machine-gun fire and died later the same day. He is buried at Finschafen War Cemetery.