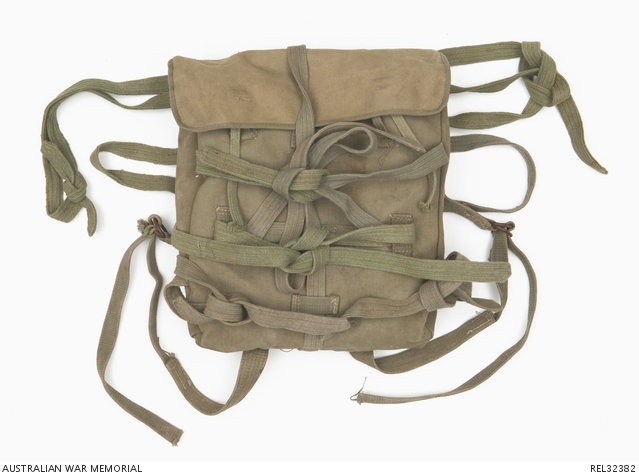 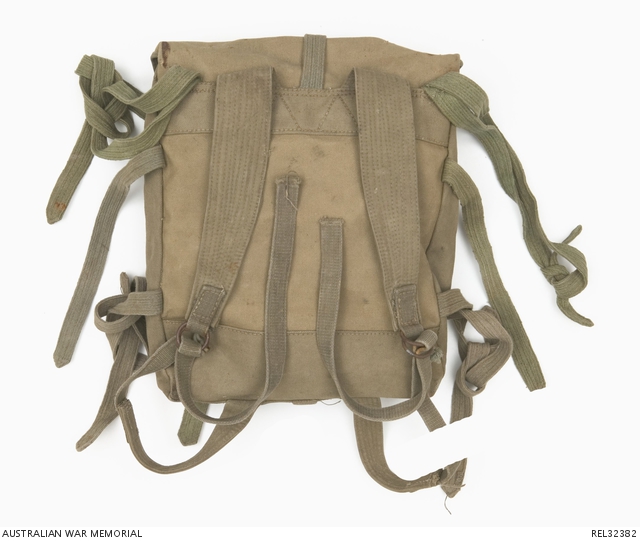 Khaki canvas pack with a large central compartment divided by a piece of cotton fabric. The pack is closed with a flap and has two adjustable shoulder straps sewn into the back. The flap is held in place by two sets of short ties on the front and a longer set of ties, one of which is sewn to the lower front of the pack and the other to the upper back. These pass over the centre of the flap and can be tied in front. There are two webbing loops on the front to hold these straps in place. The walls of the pack extend up under the top flap and can be tied together to further weatherproof the contents. There are numerous straps attached to the rest of the pack for securing equipment. Inside the flap are printed Japanese characters which give the date of manufacture and the owners name, 'Choichi Yamashita'.

NX92408 Signalman John Shaw was born in Glasgow, Scotland in March 1920. He immigrated to Australia and joined the Commonwealth Public Service, first with the Postmaster General's Office and then with the Taxation Department. He was released from his reserved occupation on 13 March 1942 and enlisted in the AIF that day. After service in Western Australia with 1 Armoured Division, Shaw was transferred to Melbourne and began training with 88 High Speed Wireless Section. In April 1945 the section was sent to Morotai. In October that year, after the end of the war, Shaw and six others volunteered to go to Tokyo and set up communications there. He remained in Japan for several months, where he collected this pack.He was discharged on 14 February 1946 and on his return to Australia he resumed his career with the Australian Public Service. He became well known for his expertise with computing, a new development in the post war era.