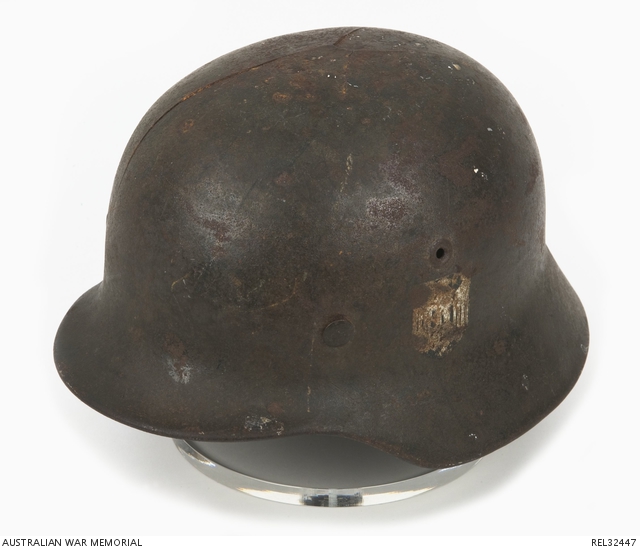 Battle damaged German Army M 35/40 pattern grey painted steel helmet complete with leather liner. The helmet has been struck (possibly by shrapnel) with sufficient force to cause a series of cracks in the crown, one section of which is depressed by several millimetres. The helmet shell has a crimped edge, and a heavily abraded rough matt paint finish. The exposed areas of underlying metal have a coating of surface rust. There are the remains of a black and silver German Army eagle decal on the left hand side. The natural leather liner is worn and discoloured. The rivets locating the liner are slightly loose, and the chinstrap is missing. A manufacturer's marking 'D120' is stamped inside the rear edge of the shell, and 'NS64' (size) inside the left hand earpiece.

The helmet was found near a dead German soldier on the battlefield at el Alamein, and was collected by Private Hyman ('Hymie') Horrowitz of the Cape Town Highlanders. Unusually, it is painted in the standard European temperate climate field grey colour, rather than the desert yellow of the Afrika Corps. Hymie Horrowitz, who was born at Benoni in the Transvaal in 1913, was working in Cape Town when the Second World War commenced. He immediately enlisted in the South African Army, and served with 1 South African Division throughout the North African campaign, seeing action at Mersa Matruh and Sidi Rezegh as well as el Alamein. He later returned to Cape Town, where he married and spent the remainder of his life, dying in 1979.