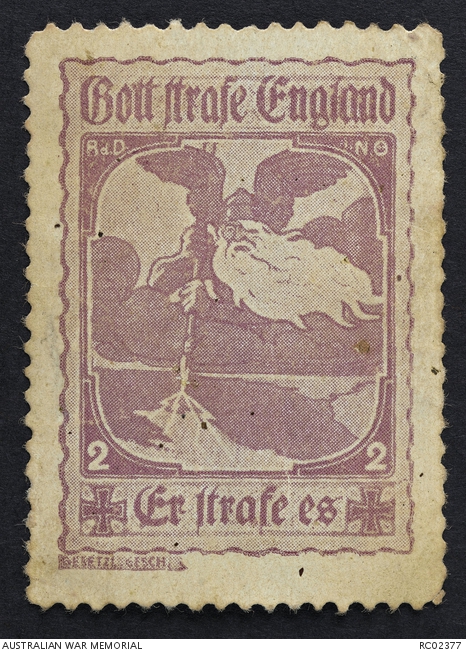 "Gott strafe England" was the motto of the German Army during the First World War and means "God, punish England". During the war Germany was accused of issuing a stamp with "Gott Strafe England" on it. This was denied by the Germans. However a number of unofficial stamp like labels were produced by non government organisations such as the "Federation of the Germans in Lower Austria" to be placed on envelopes. They featured a variety of designs such as submarines and Zeppelins, showing Germany's technical achievements, and images of England being punished in a variety of fashions. In the cinderella shown here, a Nordic god, probably Odin, punishes England with lightening bolts coming from a spear.

Odin was the chief god in Germanic mythology. Odin was often portrayed as a grey bearded old man with one eye. In this cinderella, the god's left eye is covered by hair, implying it is missing. Odin was looked upon as inspiration for warriors. He had the power to inspire men into battle and so would have been an important symbol during the war.

This Gott Strafe England cinderella was found by a British prisoner of war, F Gore who was held prisoner in Austria in 1918. He was an officer, and as such he could go outside the prisoner of war camp on Tuesday afternoons on 'parole'. Near the camp was a mountain called Swartswaldeck, which he visited with some other prisoners and at the top was a rest hut with a visitor's book. Stuck in the front of the book were several of the Gott Strafe England cinderellas. Gore took one and a Frenchman took another.