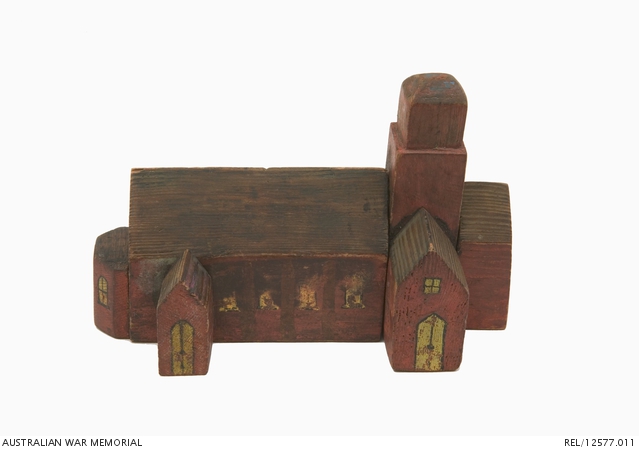 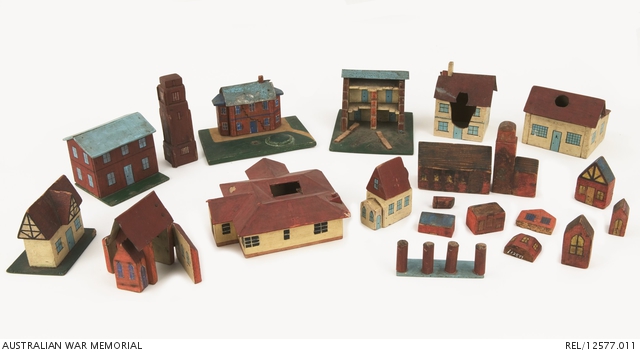 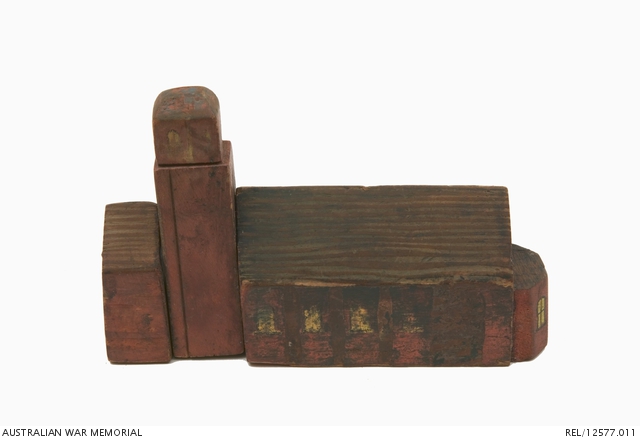 Wooden model of a church building painted red/brown. The building is designed to "collapse" into six parts that include the main building, a tower, a portico and three smaller wings. There are three windows on each side of the building, painted yellow with a black outline. The portico locates at the opposite end to the tower and is painted with three windows and an arched window. The tower has a pair of windows painted on all four sides at the top of the tower, and its top is rounded and painted blue. A porch and a side wing attach to the tower. Makings on the building indicate some sections may be missing; the separate pieces have at some stage been attached with chewing gum.

Collection of twelve (12) painted wooden and metal buildings representing houses, churches and civic buildings, some with bomb damage. They are meant to represent the section of the northern Sydney suburb of Wahroonga for which Dr William Read was the responsible warden and were regularly used for weekly Air Raid Precaution (ARP) training and large scale exercise planning sessions at his home at Cleveland St, Wahroonga. A keen carpenter, Dr Read created the buildings and originally based them on a board, painted to represent the streets in his suburb, and his daughter states "He used these to play 'war games' with his fellow wardens and had them set up on the verandah of his home." Dr Read had served in Egypt at No 2 General Hospital with the Australian Army Medical Corps (AAMC) during the First World War, to the extent of moving his wife and three children to Cairo to be close to him. Upon his return to Australia, he ran the Hospital at Georges Heights which had been set up to receive the Gallipoli wounded. Recent advice suggests this may be St James Church of England church in King St, Turramurra, some 1.5 km from Wahroonga Railway Station.