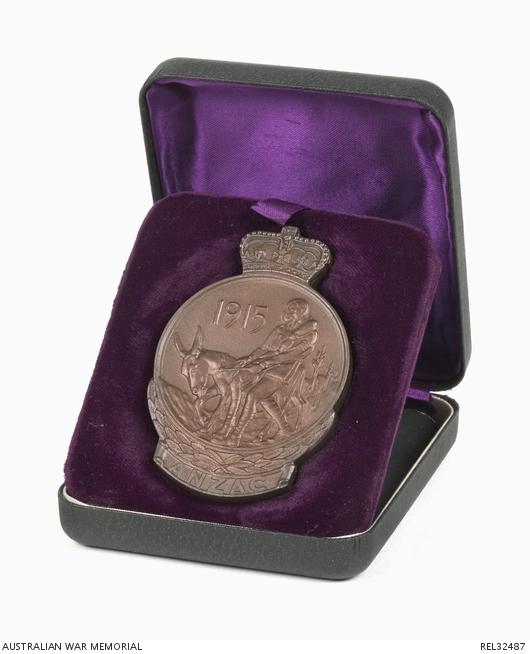 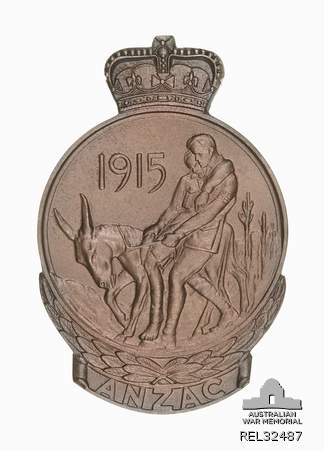 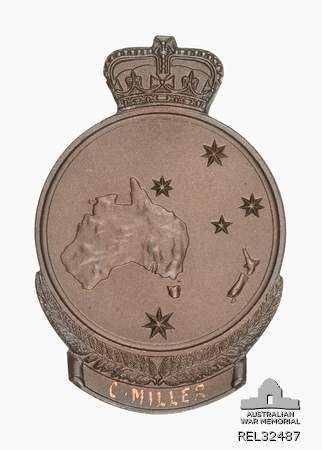 Bronze medallion issued by the Australian government in 1967 to commemorate the 50th anniversary of the Gallipoli landings in 1965. The medallion, designed by Raymond Ewers, was issued to surviving veterans or their next of kin. The medallion is surmounted by a Queen's crown. The obverse shows Simpson and his donkey, a laurel wreath, and '1915 ANZAC'. The reverse has a map of Australasia with the Southern Cross superimposed over it, fern fronds and the engraved name of the recipient 'C. MILLER'. The medallion is in its original display case and mailing box, with compliments slip from the Commonwealth Government enclosed.

This medallion was issued to Cyril Stephen Harry Miller to commemorate the 50th anniversary of the Australian landing at Anzac in 1915. Cyril Miller was born in London in 1895 and emigrated to Australia in 1911. He was working as a baker when he enlisted in the AIF on 11 November 1914. 1383 Private Miller was assigned to the 2nd Reinforcements of 5 Battalion. After training in Egypt he landed with his battalion on Gallipoli. He was three times wounded during the campaign, returning to the peninsula each time after treatment in Egypt. In 1916 he transferred to 46 Battalion, with the service number 1259, and subsequently saw service on the Western Front, fighting in the Battle of the Somme in 1916. Miller survived the war and was discharged in England on 29 July 1919, where he remained visiting relatives before returning to Australia. He worked as a missionary in New Guinea for three years, where he married a fellow missionary and his two children were born. In 1934 he was ordained as an Anglican priest. Cyril Miller died in 1989.